It's a good time to be a Pokemon fan. I remember back in the day, during my last few years of High School, the only way to get your hands on Pokemon in the home entertainment form was to buy VHS after VHS or tape it off Cheez TV on Channel 10 (Aussie geeks know what I'm saying!). Nowadays, you can get a quarter of the entire Pokemon story in one awesome package.

The Pokemon Hoenn Collection Book collects Ash and Pikachu's adventures in the Hoenn region through the Pokemon Advanced series. These series encompass Advanced, Advanced Challenge and Advanced Battle. With 16 discs, 133 episodes and over 48 hours of viewing, it's a package that Pokefans will surely drool over. 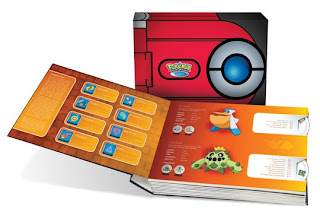 JOIN ASH KETCHUM AND FRIENDS …IN THEIR JOURNEYS THROUGH HOENN IN THIS LIMITED EDITION POKEDÉX COLLECTORS BOOK, LOADED WITH 132 EPISODES AND PAGES OF POKEMON PROFILES, REGION MAPS AND MORE!

Pokémon Trainer Ash Ketchum and his best pal Pikachu are headed to the Hoenn region for another great Pokémon adventure! From volcanic Mt. Chimney to the wealth of islands that dot the region’s shores, Hoenn is the land where elements of earth and ocean meet.

It’s more than just geology that makes this place special—Hoenn is home to scores of unique Pokémon species that inhabit the land, sea, and every place between. Ash might not be able to see them all, but he’s ready to try!

He’s also ready to battle his way to the top of the Hoenn League, but his new friend May isn’t interested in Pokémon—she wants to travel the world! That is, until her adventures with Ash inspire her to become a Pokémon Coordinator with championship dreams of her own. Together with May’s little brother Max and Ash’s old friend Brock, Ash and May are off on an epic journey across Hoenn! But when the ruthless forces of Team Aqua and Team Magma shake the region to its very foundations, are three young Trainers—and one know-it-all little brother—ready to confront the forces of evil and save the day? 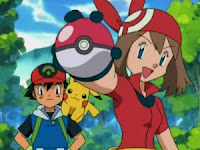 The first and most noticeable thing about the Hoenn Collection Book is it's sheer size. This thing is MASSIVE! Keeping to the same dimensions as the Johto Collection, this coffee table book sized collection offers a striking case, fashioned after a Pokedex, which holds the book itself. Upon opening the book, you get mugshots of all of the Hoenn Pokemon and a map of the Hoenn island as well as some background information on the region. While this seems to be only a nominal inclusion, it helps to expand upon the world that is otherwise only explored in the episodes. In the next few pages you get introductions to all of the main (human) characters before getting into the disc sleeves. The entire book is printed in full colour and on thick glossy stock which is a nice contrast to the matte stock used for the casing, 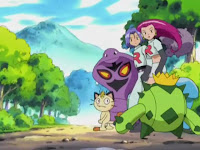 Unfortunately, since this was always intended to be screened as a TV series it is only displayed in a 4:3 ratio. While unfortunate, it is a product of the times where widescreen TV's were the exception, not the rule. As another glaring sign of the times, the animation quality is on the cheap side. This in itself is not entirely surprising considering that it was initially created as a Saturday morning cartoon series for Japanese school kids and a supplement to one of the most successful gaming franchises of all time. While the animation quality may not be quite as sharp as what we have become accustomed to, the 10 year old series' is incredibly vibrant and manages to avoid the one of the general pitfalls that many TV series find themselves guilty of - cell recycling.

In terms of story, the adventures of Ash and Pikachu get a much needed makeover. Following their time in Johto, Misty is GOOOONE! A fact that many old school fans were thankful for was made even sweeter by the introduction of May, a new female companion and her younger brother Max. While Max has a tendency to be a little bit annoying, it is perfectly in line with his position as the little brother. May on the other hand is a breath of fresh air and livens up the series in a way that Misty and Brock never could - not for a lack of trying.

Regardless of what you may think, Pokemon is an infectious series that holds a special place in many geeks hearts including my own. While for the most part formulaic, it's a tremendously fun adventure with an undercurrent which highlights the undeniable importance of friendship.

Don't forget to keep your eyes peeled for the Sinnoh Collection Book which is available soon and will be reviewed by yours truly in the coming weeks.
Anime hoenn Pikachu Pokemon pokemon hoenn collection book Review Reviews