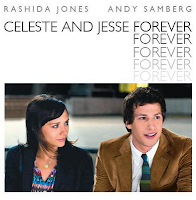 Celeste and Jesse Forever, the latest film by Lee Toland Krieger, looks at what happens when a married couple separates but attempts to stay best friends. We’ve all had that conversation with an ex-partner at some stage with varying results. Whilst straddling comedy and drama, it’s an interesting perspective on modern relationships and the pressures of life.

The film stars Andy Samberg as Jesse and Rashida Jones as Celeste. This is also the writing debut for Jones, who penned the screenplay. The two have a great chemistry on screen. The film continues the recent trend of having a quirky funny male partnered with a glamorous woman (for example Forgetting Sarah Marshall, The Break Up or Knocked Up). Whilst I don’t have a problem with this, I just feel that films can lose a sense of realism if we don’t believe that these people could be an actual couple. The men are allowed to be average looking while the women are required to be super models. In fairness the film took longer than most romantic comedies to establish the relationship through a touching montage. 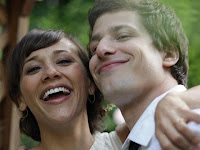 Ultimately this is about Celeste’s journey and the process of her recovery after the break-up. I admire Rashida Jones as an actress; she never plays her roles too big and has fantastic comedic timing. As a screenwriter she is also showing much potential, although at times the script was a little heavy handed in getting its themes across. However, it was only a 92 minute film; some inexperienced film makers and writers tend to take much longer to tell their stories in the hope that quantity may suggest quality.

This is the first film I have seen from Lee Toland Krieger and I will happily watch more of his films. He isn’t the flashiest of directors but at the same time this film never felt boring or static. He shoots indoor scenes beautifully and I loved his use of natural lighting. My only issue was that there seemed to be a shift in style for the melodramatic scenes, which I gather was to assist the story, but it was rather jarring to see a different style. In particular, when Celeste is at her best friend's wedding, there is a scene in which she is standing outside the reception which is shot beautifully but not in keeping stylistically with the rest of the film.

Celeste and Jesse Forever is a light and entertaining film which doesn’t try to change the world, just merely asks us to spend some time with a few characters and get to know them. Best saved for a lazy Sunday afternoon.