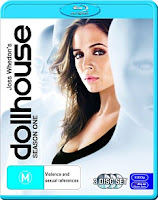 Sure, everybody knows Buffy the Vampire Slayer but it wasn't until The Avengers hit screens the households everywhere became aware of the name "Joss Whedon". A fan favourite and almost religious figure to his flock of Whedonites, he is responsible for a handful of series that have achieved cult status in subversive circles yet never managed to achieve mainstream success. While Buffy was a resounding success, Angel floundered and then came what is quite possibly one of the greatest sci-fi series of all time - Firefly. Unfortunately, Dollhouse seems to have fallen into the same trap, a fantastic series which shows a tonne of promise although was cancelled after only two seasons.

As an “active”, the mysterious Echo (Dushku) serves as an unwitting agent of Dollhouse, an illegal underground organization that provides its elite clientele with programmable human beings. Actives receive personality imprints, allowing them to temporarily become anyone or anything—the perfect burglar, lover, spy, or assassin. Now, with the FBI and her own shadowy past closing in, Echo must face a rogue Active who will stop at nothing to bring Dollhouse down—forever.

Whedon is in his element here. Acting as executive producer, writer and creator Whedon has manufactured a world within a world where human beings are essentially used as programmable entities who are hired out to the wealthy. Somewhat like The Matrix, these "dolls" are have memories and skills of others uploaded into their brains leaving their brains, like a hard disk drive, fragmented and containing ghosts of the past. This element of the series, while never completely explained, plays a big role in the overall series. It raises questions about future uses of the human brain and what it means to be human. Is it out bodies or our minds that make us who we are?

The fact that these "dolls" are able to be programmed and reprogrammed also makes that series' storyline feel fresh and dynamic. From episode to episode you never know if the main cast members will be an assassin, a prostitute or a pop star. Add to this an underlying story of clandestine intrigue and you've got yourself a series that has so much to offer. Not only is the story and the premise thoroughly entertaining, but the cast all deliver performances that capture their characters to a tea. While I'm sure that the casting agents on Dollhouse deserve the bulk of the credit, this cast has Whedon written all over it.

Whedon is well known for calling in old friends for roles and Dollhouse is no exception. While some people may see this as recycling, I see it as a clever move because not only are you assured of quality but it also emblazons this production with the "Whedon Stamp of Approval". In the lead we have fan-favourite Eliza Dushku (Faith) as Echo, Alexis Denisof (Wesley) as Senator Perrin, Amy Acker (Fred) as the Doctor and Alan Tudyk (Wash) as Stephen Kepler. New to the Whedon stable are Aussie Dichen Lachman who absolutely shines onscreen and Fran Kranz who, even since Dollhouse, has appeared in The Cabin in the Woods, a Whedon co-production. In a way, having a familiar cast of characters makes each episode feel like a geeky treasure hunt.

Dollhouse season 1 is a brilliant addition to the Whedonverse while also being an action packed series full of espionage, intrigue and a wry sense of humour.