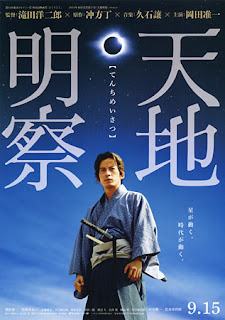 Tenchi: The Samurai Astronomer is a strange beast of incredible pedigree. Yojiro Takita may not be the biggest name director in Western circles, but his most successful film, Departures, has drawn critical and financial acclaim from all corners of the globe. No stranger to manga and novel adaptations, he has now set his sights on Tenchi which is based on the novel of the same name by Tow Ubukata, somewhat of a celebrity in his own right. As the writer of Fafner, Heroic Age and Mardock Scramble, Ubukata is best known for his work in science fiction and fantasy circles however this time, his story is far more grounded.

Young samurai Santetsu is an avid astronomer with a passion for mathematical puzzles. So when he is asked to devise a new calendar – a task which involves charting the stars across the length and breadth of Japan – he throws himself into the project with gusto. However, the idea of a new calendar and the ideological change it could bring poses a threat to certain powerful figures in society, who seek to hamper Santetsu’s progress. With the stakes continually rising, will he be able to complete his calendar – or will he run out of time? From the director of the Oscar-winning film Departures - Japan Foundation

While not the emotional character study that Departures was, Tenchi is somewhat of a biopic which is focussed on one of the more mundane, and therefore untold, stories in Japanese history. While the story itself isn't exactly the most exhilarating one, Takita proves his skill as a director by making the film much more enthralling than it rightfully should be. Without resorting to cheap tactics of violence and sex for cheap thrills, Takita manages to create a film that is enjoyable almost solely due to the characterisation of its protagonists and attention to detail with regard to the science behind the story in this Edo period piece.

By rights, this should be an absolute snore, and in all honesty it does at times feel arduous. It is difficult to create a film about mathematics and astronomy, including scientific theorems, without feeling laborious at some time. However, Takita captures some great performances from a cast of relatively unknown actors. Performances by lead actors Junichi Okada (one time V6 boy band member) and Aoi Miyazaki benefit from an on screen chemistry that offers the familiar warm feeling of burgeoning love and the overwhelming urge to be near. This is of course all performed in a manner that is much more subdued and stoic that you would expect from a western film, a fact that makes unrequited love even more emotional.

Having collaborated with Takita on Departures, Takeshi Hamada returns as director of photography and delivers yet another visual treat which explores the Edo period to full effect. Also of note is the fact that Hamada was also the Director of Photography on another title at this years Japanese Film Festival, Star Watching Dog.

Tenchi: The Samurai Astronomer may be more palatable to Japanese audiences but western audiences will still be engaged by this well executed period piece of an unknown slice in Japanese history.