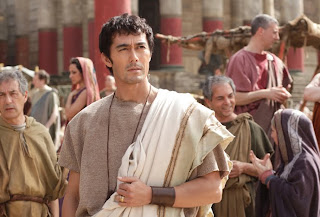 Thermae Romae is an ambitious film which has one of the most peculiar premises I have seen in a long time. Set in Ancient Rome (128 AD), we meet Lucius (Hiroshi Abe), a frustrated architect who wants to return Rome’s bathhouses to their former glory. Whilst taking a bath, Lucius is sucked through a small hole which transports him to a modern-day bath house in Japan. Amazed by the inventive aspects of Japan’s bathing culture, Lucius returns to Ancient Rome and becomes somewhat of a celebrity as he implements the modern day ideas in Rome. Whilst travelling back and forth, Lucius is assisted by an aspiring artist Mami (Aya Ueto) which results in a very funny and thoroughly entertaining film.

I was immediately impressed by the production design of this film, directed by Hideki Takeuchi. The opening sequence shows Lucius and a friend making their way through crowded market places and intricate alleyways all of which invest in hundreds of extras on screen at any time. This gives the film a lived-in feel and helps set up the world.

The casting is excellent. Hiroshi Abe is a handsome charismatic lead who towered over his fellow cast members. I really enjoyed his comedic touches. I liken them to George Clooney’s shifting manner of suave and slap stick. Aya Ueto was perfect as the bumbling wannabe manga Artist who falls for Lucius. She is equal parts quirky and refreshing on screen. The bulk of the comedy, however, comes from a group of older men who constantly bath together during the modern day sequences.

One of the best decisions made in this film was to waste no time in setting up the logistics of time travel. Some Western films have fallen into the trap of over-thinking it. Thermae Romae simply has the hero slip under water and he appears in the future. I loved this because it showed faith in the audience. We all know how time travel works in movies, so we basically only care what the character does in the future not how he got there. The director seems to be taking this even a step further by having an interesting transition shot for the time travel, which consists of characters been flushed in a whirl pool and a opera singer appearing near a water fall.

The only negative criticism I have of the film is that it’s a tad too long. As the story develops it tries to address politics, warfare and various other issues facing the Roman Empire at the time. Whilst I admire the effort I felt that that it spread itself a tad thin trying to cover so much ground. The film could have been tightened considerably by trimming about 25 minutes. That being said, it was still far more adventurous than most films of the genre.

Whilst never being thematically heavy-handed or overly sentimental, Thermae Romae strikes a balance between historical drama and genuine comedy. I loved that the film makers decided to look at such a specific time in history and tied the events of the past so well into modern-day Japanese culture.