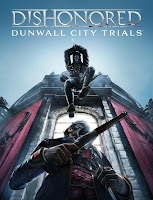 A mainstay on 2012's "Best of" lists, Dishonored has an average ranking of 90.75% from Gamerankings.com. While games revolving around the exploits of professional assassins aren't anything new, the fluid gameplay and steampunk aesthetic have taken Bethesda's Dishonored to a whole new level.

Bethesda is pleased to announce that they’ve just released a new gameplay trailer for Dishonored: Dunwall City Trials, the first add-on pack for the critically-acclaimed first-person action game developed by Arkane Studios. Check out the all new clip after the jump!

Dunwall City Trials will include 10 challenge maps that will test and track your combat, stealth and mobility skills. Creatively combine your supernatural abilities, weapons and gadgets to eliminate as many targets as possible, fight off waves of tallboys, guards, weepers and thugs, or take out targets in a non-stop run of drop assassinations. Dunwall City Trials also features a new set of achievements and trophies as well as a global online leaderboard.

For more information on Dishonored and the newest add-on pack please visit www.Dishonored.com.