February, the poor younger sibling of January gets such little attention. That is, until Hanabee came along. They decided that February deserves more appreciation, therefore they bestowed upon old Febby a veritable BEVVY of new releases with something for everyone.

So, whether you want action, adventure, laughs or drama - Hanabee's got you covered in February 2013.

In sixth grade Yuri just wants to end her final year in elementary school on a quiet note...not as a member of the 'Alien Party'.

The ‘Alien Party’ is in charge of the capture and maintenance of the many rogue aliens that wander on to the grounds. But to capture these aliens you need the help of one. Known as a "Borg", this symbiotic life form offers the ability to protect, incapacitate and ultimately capture other aliens in compensation for being able to feed off them... by licking their back.

For Kumi and Kasumi, being a part of the Alien Party means they’re free from the need to resolve other people’s issues with the added chance to exert their athletic ability and intelligence. It’s basically their ideal job at school.

For Yuri, it's her worst nightmare.

ARAKAWA UNDER THE BRIDGE X BRIDGE

The antics for the residents at Arakawa Under the Bridge continue in this hilarious sequel!

Just as Ko is settling on to the banks of Arakawa with his eccentric neighbours, he learns that he has barely scratched the surface! As now not only does he have to deal with his usual assortment of strange friends, but he’s also got an Amazonian woman with her tribe of demonic “female” followers breathing down his neck and a comic nerd who is the self-claimed head of the Earth Defense Force as well.

But that is the very least of Ko’s worries as Nino’s claim to being an alien may not be as absurd as previously thought. Ko is now faced with the very real possibility of either moving across the stars -quite literally - or risk losing her forever.

New secrets and friends arise, as Arakawa Under the Bridge truly becomes a place for the odd and eccentric to gather!

EF ~ A TALE OF MELODIES

Some things are inevitable. Others are chosen.

Shuichi Kuze resigned himself to his short life after the discovery of his illness, but things might change when he meets one, Mizuki Hayama. Mizuki is bright and energetic with a thirst for life; the complete opposite to him. The more Kuze finds himself in her presence, the more his worldview begins to alter. But is it too late for change?

Whilst in the past Yu meets Yuko after ten years of separation. But ten years is a long time and so much can happen between now and then. With Yuko hiding a secret, Yu is determined to learn the truth... except the truth may be more than he can handle.

Where our actions determine our future and fate is a cruel mistress, our life choices determine who we are and who we want to be. 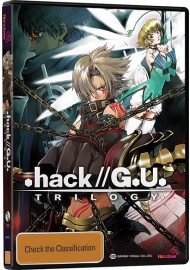 In a quest for revenge against Tri-Edge, Haseo has become a killer of Player Killers. Callous and dismissive, he has become a shadow of his former self. Atoli wishes to alleviate some of this pain and makes it her mission to help him, but this may be a difficult task when her face reminds him of a fallen friend.

But Atoli may be the least of Haseo’s problems. Tri-Edge’s influence appears to go above and beyond his attack of his friend Shino, with deadly consequences. When a death in the game causes the player to fall in a coma in the real world, it’s a race against time to stop the attacks before its too late.
acquisition Alien 9 Anime Arakawa Under the Bridge X Bridge Ef a Tale of Melodies Hack GU Trilogy hanabee News