Arakawa Under the Bridge Season 1 Review

Arakawa Under the Bridge started its life as a 12 issue manga series by Hikaru Nakamura before spawning 2 season of anime and a live action film. This in itself is proof enough of its success although it's, quite frankly, surprising to see so much money sunk into such a ridiculous series especially considering that the entire cast of characters are nuttier than squirrel poo. Surprising, that is, until you watch it and realise, it just works.

Don't let the pastel adorned cover fool you, Arakawa Under the Bridge isn't a cutesy series, it has it's fair share of grown up humour and edge.

For one, Ko Ichinomiya, born and raised to never be in debt to anyone, upholds this idea very seriously. So when a girl named Nino, a self pro-claimed ‘Venusian’, inexplicably rescues him he is left with the greatest debt of all.

Agreeing to become her boyfriend and moving in with her as repayment gets more complicated when your girlfriend’s home is literally under a bridge and you’ve just met the eccentric neighbours. Featuring a centuries old kappa, a cross-dressing nun, a rock star with an actual star for a head, to mention a few, all of whom make the ‘Venusian’ Nino seem normal, Ko just might be in over his head. - Hanabee 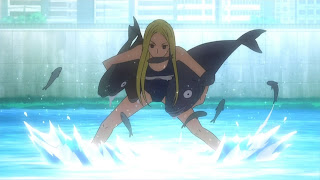 There are plenty of anime series out there that embrace the absurd. While Excel Saga was for the most part embraced by the majority of anime fans and FLCL is widely considered to be a masterclass in lunacy but few others are as hilariously silly, heartwarming and visually impressive as Arakawa Under the Bridge. While the story seemingly revolves around a high achieving rich kid, an alien girl, a "kappa" man and a transgendered nun it actually delivers so much more. In fact, it is a story about the important things in life. Is money important? Personal achievements? What about surrounding yourself with a ragtag bunch of weirdos? At times Arakawa almost feels as though it's channelling Terry Gilliam's The Fisher King in so much as Ko, the straight man in the story, finds himself surrounded by crazy people. His only choice is to embrace the chaos, unwind and find the goodness in each of Arakawa's wacky characters. 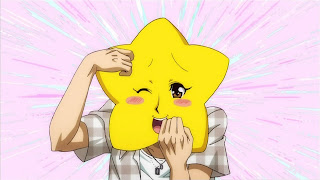 The comedy in Arakawa can be, at times, hit and miss and there are a few jokes that fall flat. That said, it is always difficult to know if the joke actually failed or failed to translate. In this case I'm willing to give director Akiyuki Shinbo the benefit of the doubt. He carries on many of studio Shaft's trademarks such as writing on backgrounds and strange opening themes. These trademarks work even better than usual in Arakawa and add to the already eclectic aesthetic. Brilliant flashes of brightly coloured hiragana don't so much add to the story but instead reinforce the audiences awareness of the fourth wall and how close the series comes to breaking it. Just as you'd expect from Shaft, the studio behind Puella Magi Madoka Magica, the visuals are superb. Instead of trying to impress with experimental imagery like in PMMM, Shaft have focussed on the comedic elements and dialled it up to 11. In fact, like with  the comedy itself, the use of a traditional mainstream style of animation is delivered almost in spite of the core material. 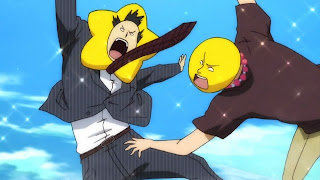 Arakawa Under the Bridge is a special kind of series that manages to be absurd and yet completely in touch with its emotional centre at all times. Like the hilarious Gintama, Arakawa delivers the ridiculous with a completely straight face which seemingly multiplies the hilarity. If you like your comedy absurd, Arakawa Under the Bridge will undoubtedly delight. Thankfully Hanabee are soon to be releasing season 2, Arakawa Under the Bridge x Bridge, next month but if that's not enough maybe you should start emailing, calling, faxing and carrier pigeoning them recommending they acquire the rights to the live action film! Please do, they've stopped taking our calls...

Arakawa Under the Bridge Season 1 is available on DVD from Hanabee and Season 2 is available for preorder!
Akiyuki Shinbo Anime arakawa under the bridge DVD hanabee Review Shaft