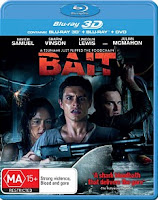 Unfortunately, Aussie film releases are generally few and far between and even when they do see the light of day, widespread distribution is another hurdle to overcome. Enter Bait 3D. The story of sharks in a flooded grocery store was and Australian and Singaporean cooperative with a whole bunch of money coming from China as well.

In the most honest of comparisons, Bait is the poor lovechild of Jaws and Snakes on a Plane although never quite reaches the lofty heights or pleasurable lows of either film.

It's hard to determine whether a film that attempts to be bad, and succeeds, is actually good but we'll give it a try.


Plenty of films have done it before, purposefully smothering themselves in cheese. The Troma films were classic for this approach and more recent examples have seen a resurgence of the low budget, horror/gore genre. Bait seems to embrace the cheese factor although a number of performances seem to confuse it's intention by failing to plant their tongue firmly in cheek and highlights the predominant short coming of the film, an acute case of identity crisis.

For a film with such a small budget and arguably ludicrous script, the entire film would benefit from a blanketing of cheese which envelopes acting, sound, action and premise.While Bait embraces the schmaltz for the most part, subdued acting (and arguably the best in the film) by Xavier Samuel, Sharni Vinson and Martin Sacks make it difficult to decide which side of the pool Bait was swimming in. However, delightfully corny performances by Dan Wyllie, Cariba Heine and Lincoln Lewis brought the film back into the realm of a slapstick gore-fest. The final element of confusion came at the hands of characters accents, of which there were many - and that's just at the hands of Heine!

In terms of action and quality, Bait passes muster on most fronts. The production design in the flooded grocery story was solid and convincing, if under decorated. Underwater scenes show that the sets were well constructed and, while notoriously difficult to shoot, had the cast in the most precarious of positions: The sharks home turf. The films CGI was more than passable, especially considering the lack of budget, and made for generally  great looking CG shark and some quite gruesome and cringe-worthy death scenes.

The main problem with Bait is that it wasn't bad enough. As ludicrous as this sounds, a number of passable performances and a somewhat reasonable plot make for a film that fails to be so-bad-that-it's-good and just lingers in the shallow end of the bad pool. I am, however, grateful that we were spared the seemingly obligatory T & A scenes which are generally common place in schlock horror films such as Bait.

Regardless of the films critical analysis, it's commercial success has lead to the announcement of an impending sequel. After grossing more than $20 million at the Chinese box office alone and solidifying its place as the highest grossing Australian film released in China, we will be seeing a whole lot more motherflippin' sharks in a motherflippin' grocery store.
aussie film Australian Film baid 3d bait Blu Ray DVD lincoln lewis movie Movies Review Reviews xavier samuel