Cinema Release for Pokémon: Kyurem Vs The Sword of Justice

Exciting news, Poké-fans! Pokémon The Movie: Kyurem Vs. The Sword of Justice will be screening at select cinemas in Australia and New Zealand.

Follow on for all the details on the film, trading card demonstrations and COMPETITIONS! Also, stay tuned for your chance to win a double pass thanks to our friends at Beyond Home Entertainment!

Hoyts Plus to give Pokémon Movie 15 the ‘big screen’ treatment to celebrate the DVD and Blu-ray release the highly anticipated Pokémon The Movie: Kyurem Vs. The Sword of Justice will be released to DVD in Australia on 6th March and in New Zealand on 20th March. This will be the 15th Pokémon movie released and available on DVD and Blu-Ray from all good retailers - $19.99 RRP Australia/New Zealand. 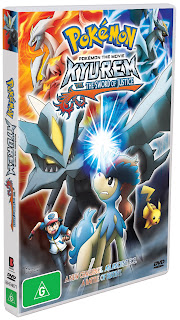 To celebrate the release of the DVD, fans have a chance to see the movie before it lands on shelves. Throughout Australia and New Zealand, special screenings will be held at selected Hoyts Cinemas on the last two weekends in February.

Pokémon screenings on the following dates and locations:

*Sat 16th Feb – All above locations

*Sun 17th Feb - All above locations

All guests purchasing their Pokémon movie tickets from hoyts.com.au can enter the draw to win 1 of 12 awesome Powered-up Pokémon Prize Packs worth $219 including the newest DVDs, trading cards and Nintendo games. Competition will run from Monday 21st January 2013 – Sunday 24th February 2013.
(competition open only to Australian residents)

Thanks to Tomy and Yarra Media, guests will also receive a free Just Kidding Magazine at each session (while stocks last).

*Tickets are now on sale and can be purchased online. 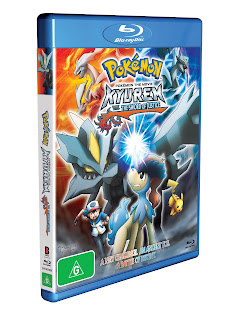 POKÉMON THE MOVIE: KYUREM VS. THE SWORD OF JUSTICE

In Kyurem Vs. The Sword of Justice, Ash and Pikachu, along with their friends Iris and Cilan, are on a train headed to the next stop on their journey. From the train, Ash spots an injured Pokémon – one he’s never seen before. He’s trying to figure out how he can help when the train is attacked by the Legendary Kyurem, a Dragon-type Pokémon with immense power! Ash and the others barely manage to escape the rampaging Kyurem’s attack, and as the dust settles, they turn their attention to the injured Pokémon. Their new acquaintance turns out to be the mythical Pokémon Keldeo, and it’s on a mission to rescue its friends – Cobalion, Terrakion, and Virizion, the Legendary Pokémon known as the Swords of Justice – from Kyurem’s icy clutches!

But Kyurem’s rampage isn’t over, and it’s drawing power from Reshiram and Zekrom, changing into Black Kyurem or White Kyurem to make its attacks even stronger! Why is Kyurem attacking Ash and his friends with such unrelenting fury? How will they be able to overcome this danger? To protect its friends, to discover true power and genuine courage, and to preserve its bond with Ash and its companions, a hidden strength awakens within Keldeo… Can Keldeo find the courage to stand up to this menace?
Anime ash hoyts movie News Pikachu Pokemon Pokemon movie