On the same day that Tom Taylor's first issue of the comic book tie-in is release, we can confirm the release date of Netherealm's latest foray into the world of spine punching madness, Injustice: Gods Among Us.

Also confirmed were the collectors edition bundles that will grace the shelves of JB Hi-Fi and EB Games stores here in Australia.

Accompanying the news is an image of the Injustice: Gods Among Us Collector’s Edition, which will be sold separately for $109.95 at EB Games and JB Hi Fi in Australia for the Xbox 360 and PS3. 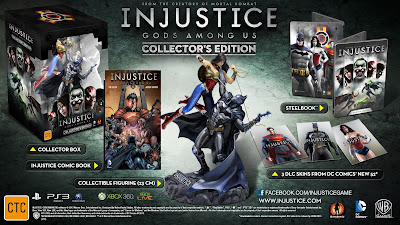 The International Injustice: Gods Among Us Collector’s Edition will include:


Also available today is the new Injustice: Gods Among Us digital comic book from DC Entertainment.  The comic is a prequel to the game, and it tells the story of events leading up to a new world order where heroes face each other in an epic fight to determine humanity’s future. Download Injustice Gods Among Us #1 today at DCEntertainment.com, through the DC Comics app, on the iBookstore or Kindle Store.

Injustice: Gods Among Us is an all-new game in development by award-winning NetherRealm Studios, creators of the definitive fighting game franchise Mortal Kombat.  The title debuts a bold new fighting game franchise that introduces a deep, original story featuring a large cast of favorite DC Comics icons such as Batman, Cyborg, Harley Quinn, Nightwing, Solomon Grundy, Superman, The Flash, Wonder Woman, The Joker, Green Arrow and many others.  Set in a world where the lines between good and evil are blurred, players will experience heroes and villains engaging in epic battles on a massive scale.

For more information on the game, visit www.injustice.com. 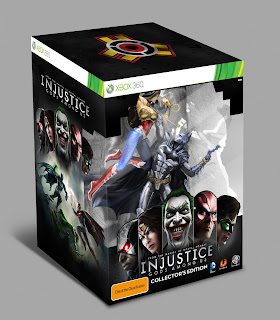 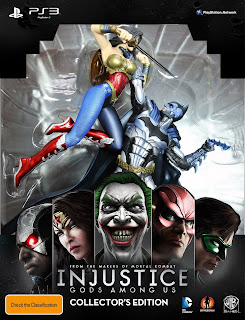