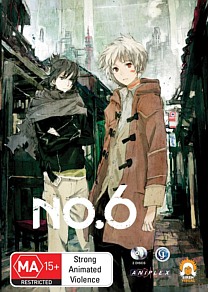 Before this review starts it's very important to note that No.6 takes place in 2013, after a great and devastating war. It's time to panic, people!

In 2013, after the great war devastated the world, six city states remain, created by The Babylon Treaty.

Sion is a boy assessed as having the "highest-ranked intelligence" at age 2, allowing him access to the luxurious "Cronos" living area. On his 12th birthday, he meets a troublesome boy called Nezumi, who has just escaped from a reformatory and on the run from the authorities. As punishment for harbouring a fugitive, the Public Security Bureau strips Sion of all his privileges, resulting in expulsion from "Cronos".

After four years of banishment, Sion and Nezumi meet again, resulting in the revelation of the secrets and mystery behind the city No.6 - Siren Visual

Based on a series of novels by the same name, No. 6 delves into a war ravaged dystopian world where a caste based society sees cultures clash in the form of our main characters Shion and Nezumi. Reminiscent of Bradbury's Fahrenheit 451 or Orwell's 1984, big brother is always watching, monitoring public sentiment allowing them to stifle dissent from the residents of state number 6. While the main setting of the series is the dystopian caste based system, the predominant focus is placed on the relationship between the two main characters. Their experiences are made all the more rich and exciting due to the characterisation of Shion, an innocent and pure hearted young man. His kind nature makes him the perfect offset to Nezuma who is tough, cynical and altogether brash.

While the characters are solid, endearing and well fleshed out, the animation quality is even better. Studio Bones never fail to satisfy and this, their third outing in Fuji TV's noitanimA programming block, is no exception. The character designs are original without resorting to cheap gimmicks such as eye patches or crazy hair and the environments too are a sight to be seen. The differentiation between No. 6 and the ramshackle dilapidated areas beyond the walls reflect the characterisation of Shion and Nezumi.

Moments of quite reflection and character growth are all well and good but it's during the action sequences that Studio Bones truly shines. So too does the soundtrack by composer Keiichi Suzuki (Tokyo Godfathers) which at times appeared to be a retrospective of simpler times, a stark contradiction to the series' setting. The opening and closing themes also work well to create balance in the series which at times teeters on the melodramatic.

What a way to start the year! Although this review is being posted in January 2013, No. 6 was released by Siren in December 2012. If you take stock in such things, No. 6 would definitely have found it's way into the Geek of Oz top 10 anime releases of 2012. In not strictly adhering to the post-apocalyptic genre, No. 6 manages to bend the genre to suit its purpose and in doing so, is a completely original and memorable series. The only complaint: I want more.