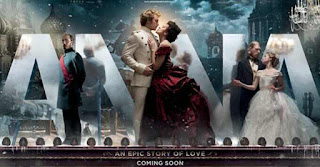 Anna Karenina, the latest film by Joe Wright, is a visually provocative production which brings new and interesting ideas to the screen, but is ultimately cold and unfulfilling. Based upon the Tolstoy classic, Anna Karenina is set in late 19th-century Russian High society. Anna (Kiera Knightly) who is the loving wife of Karenin (Jude Law) has a torrid affair with a much younger Calvary officer, Count Vronsky (Aaron Taylor-Johnson). The affair sends ripples through the upper echelons of the social and political communities of the time.

Before seeing the film I was worried that it may be a drab and lifeless adaptation with too many forgettable characters. Whilst not being familiar with the source material, I took a punt that it wasn’t going to be a light-hearted romantic comedy. Our Russian friends do seem to have a flair for epic dramas. The one saving grace was that Joe Wright was at the helm. To date I have only seen one of his films, Hanna (2011). I didn’t particularly love the film, but I was intrigued by Wright’s direction and most importantly his phenomenal control of the camera. He has the ability to shoot exceptionally fast moving sequences and make them appear seamless. Anna Karenina is almost entirely set within one theatre, however as the narrative progresses, the stage changes to reflect the story. The effect was amazing as there could be up to 40 people on stage at any given time and in a flash they would all assume new roles, complete with new costumes. This gave the film a real sense of vibrancy and dynamism. The most notable sequences are the theatre conducting a horse race, its transformation into a grand railway station and a dance sequence involving Anna and Vronsky.

I was off to a great start; I was thoroughly engaged with the film until the story started to play out and the film started to abandon the style of the first twenty minutes. The energy and pace seemed to stagger and the film settled into a more generic style of shooting. This all coincided with Anna and Vronsky starting their affair. Now, in fairness, they are the focus of the story, but I believe that the style didn’t need to change so dramatically when they came together. There were still flashes of flair but nothing compared to the opening moments.

I am not the biggest supporter of Kiera Knightly. I believe that she is still finding her way as an actress. She can be guilty of playing for the big moments and falling just short. I found myself chuckling at a few of the more emotional scenes because they just fell so flat. This was due, in part, to the fact that she was partnered with Aaron Taylor-Johnson who I feel is still trying to make his mark on Hollywood, with limited success. Both leads needed to be pulsating with desire and passion; sadly we got a couple who rarely raised their voices above a murmur and had as much sex appeal as a Boris Yeltzin at an AA meeting.

Coming in at just over two hours, the film felt about 20 minutes overweight. A trimming down of the run time would have retained the earlier pace of the film and would have potentially avoided the slow and painful third act, which really dragged on. The fact that it felt protracted greatly diminished the impact of the emotional scenes and affected my ability to engage with the protagonists because I simply felt bored.

Anna Karenina is not for everyone but there are plenty of positives to dwell upon. I recommend this film to anyone who is prepared to overlook its shortcomings and gorge themselves on the beauty of visual spectacle.