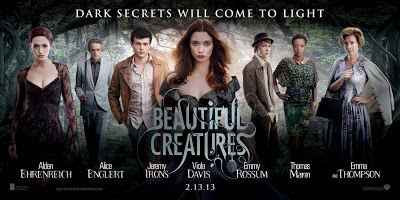 Following the success of the Twilight adaptations, it was only going to be a matter of time before the market was flooded with other films looking to capitalising on the strength of their book following: an army of poorly made, heavily marketed and utterly inane films marching upon decent cinema. When I first saw the trailer for Beautiful Creatures I thought I knew exactly what I was going to get and just how bad it would be. I envisaged another useless teen gothic fantasy, with too many pretty young actors who couldn’t emote. It just looked ridiculous. So imagine my surprise when I caught myself thoroughly enjoying this film. Perhaps it was because my expectations were set so low that the film couldn’t be as bad as I had assumed it would be; or maybe Beautiful Creatures is a fun little film that benefits from a great script, fine performances and the fact it never takes itself too seriously.

Based upon the novel by Kami Garcia, Beautiful Creatures is set in the fictional town of Gatlin, South Carolina. The story focuses upon Ethan Wate (Alden Ehreneich) who is desperate to move out of home and get as far away as possible from his home town. He soon meets Lena Duchannes (Alice Englert), a mysterious new kid-on-the-block. Lena is a caster, which is basically a politically correct way of calling her a witch. She lives with her uncle Macon Ravenwood (Jeremy Irons), who attempts to keep Lena away from Ethan at all costs. The story takes place in the lead-up to Lena’s 16th birthday, at which date she will be claimed by either the light or dark side of magic – a decision completely outside her control. As Ethan and Lena’s relationship intensifies, so does the fight for her future.

The film succeeds where many adaptations don’t because it develops the characters gradually and doesn’t proffer useless information. I often see characters brought into films that I think must have had a far greater role in the book. It’s as if the filmmakers are trying to please fans of the book by including minor characters, when in fact all they do is confuse the film audience. A film can never contain as much information as a book, however it can be just as effective in telling the same story. I would imagine that there are characters that could have been fleshed out more in this story and maybe some of them didn’t even make it onto the screen, and yet I felt the story didn’t suffer from under-characterisation. Ethan and Lena traded rapid fire dialogue mock fighting and thinly veiled insults which gave them a grounded quality, especially when compared to the constipated staring matches employed in the Twilight instalments. The two leads, Alden Ehreneich and Alice Englert were impressive. Their constant ribbing of one another was plausible and enjoyable.

Whilst the leads were clearly the standouts in this film I thought it was very clever to surround them with veteran actors such as Jeremy Irons, Emma Thompson and Viola Davis. They added gravitas to the film. Emma Thompson and Jeremy Irons especially looked as though they thoroughly enjoyed themselves. It helps the film immensely when people don’t play down to the material and embrace their character, despite the silliness of it all.

Of the recent book adaptations (including Percy Jackson and the Lightning Thief, I Am Number Four, Twilight and the Hunger Games), Beautiful Creatures has by far the best sense of humour. Almost every moment of tension or emotional sincerity is undercut by a joke. This sounds like a criticism but it actually worked rather well. It reminded me of fantasy films of the 80s like Labyrinth and Goonies. I loved that this film had many moments of self-deprecating humour, taking aim at the witchcraft elements and the teenage romance tropes. It was refreshingly self-aware which makes it far more entertaining than the usual melodramatic rubbish we’ve come to expect from the genre. Even the setting of the film was perfect because it allowed the film to take aim at the right-wing religious element in south of the USA. Simply put, the town of Gatlin is the buckle upon the Bible belt, where people pray openly in public and believe Satan is lurking around every corner. Such a cynical depiction of the South – I loved it!

The film does have a few negatives too, I wasn’t a fan of the sloppy computer effects and the score was forgettable. That being said, there were fewer effects-laden sequences than I expected, given the nature of the film. The set of Macon Ravenwood’s house was laughable - once again I imagine it was fantastic in the book but sadly the imagery was painfully poor on screen. As the film races towards in climax, the special effects do start to ramp up and look slightly pedestrian, possibly because they were produced on a cheapish budget. The score was relatively ineffective; even moments after seeing the film I wasn’t really able to recall much of it. Whilst this may seem like nit-picking, they can be the difference between a good film and a great one.

I’m well aware that this film may not be for everyone. Perhaps I was just in the mood for something light and disposal and that’s what this gave me.  Beautiful Creatures won’t be in my top ten of the year but it surely won’t be in the bottom ten.