For some reason when I first heard the title "Bodacious Space Pirates" I was expecting something over the top which borders on ridiculous. Perhaps the 80's kid in me wrongly associated the term "bodacious" with the Teenage Mutant Ninja Turtles and began expecting a smattering of off the wall antics, larger than life characters and action aplenty. Sadly, there isn't a great deal of bodaciousness to be had.

Although the title may be a little misleading one thing is for sure, Bodacious Space Pirates is a surprisingly fun romp through the depths of space.


Based on the popular on-going light novel series by Yuichi Sasamoto, which has already spawned a manga as well as an anime, Bodacious Space Pirates is 26 episodes of high-octane swashbuckling fun! The series is a meld of the space opera genre with mecha as we see pirates of the future take off in space.

By the series director of the Ninja Scroll TV series and animated by the same studio behind Fairy Tail, Satelight. - Hanabee 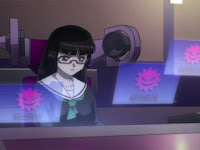 Notice that yellow rectangle on the front cover? Yeah, it indicates that this is an almost all ages affair. Don't go expecting Sexy Space Pirates or Skanky Space Pirates because that, my dear spacefarers, will only lead to disappointment. In fact, much to my delight, there is very little fan service throughout this entire first part! The skirts may be short but all of the characters modesty is kept intact. If your constantly bleeding nose needs a rest, this is the series for you. Even without panty flashes and partial nudity the characters manage to be super cute. The animation supplied by Satelight is gorgeous. The colour palette is rich and flecked with an overarching neon theme which is reflected in the cover art. Even though the CGI strikes a stark contrast to the traditional, character animation, it is brilliant quality and brings a crispness to scenes set in space.

Bodacious Space Pirates is the type of series that you'll need a pen and paper for. It has a cast of thousands and each one of them are unique, both in terms of personality and character design. Sadly, it doesn't spend enough time on any one of these characters for an emotional attachment to be formed. There is an incredible back story that gets touched on, but still leaves much to be desired. Plus, WHO IS THE GIANT DEMON ROBOT GUY? Some form of acknowledgement of the crew and how they came to be aboard the ship would have made the overall experience far more immersive. This gripe, of course, excludes the main character Marika who is the main focus of just about every scene.

The lack of character progression is a by product of a far more sinister problem. Bodacious Space Pirates suffers from  pacing issues. It takes an acceptable amount of time for the series to get rolling then when it does, it seems to grind to a halt for a number of episodes which focus on an incredibly low-stakes issue which leads the series to another issue. For a group of Space Pirates, the captain and crew never seem to be in any real threat, no one is at risk of death or injury. That said, Marika herself is a delightful character who manages to avoid a number of common anime heroine tropes by being a intelligent, happy-go-lucky and perfectly capable of her command. This is a female lead that can be appreciated on so many levels.

Although the series suffered from pacing issues, it still left me wanting more and even though no one was run through with a cutlass or forced to walk the plank, it was still an engaging and enjoyable watch. Being easy on the eyes certainly doesn't hurt either!

Bodacious Space Pirates part 1 is available on DVD and Blu Ray from Hanabee!