Although still two months away from spinner racks, Star Wars Legacy: Prisoner of the Floating World has caused a buzz with comic book and Star Wars fans alike. While these two are not mutually exclusive, the fantastic response to Brian Wood and Carlos D'Anda's new Star Wars ongoing has breathed new life into Dark Horse's Star Wars franchise.

Enter Corinna Bechko and Gabriel Hardman. Fresh off the (silver) back of their Betrayal of the Planet of the Apes mini-series from Boom Studios, they have again joined forces but this time on the worlds most successful film franchise.

Thankfully for ourselves and our loyal readers, Corinna and Gabriel took the time to chat to us about the upcoming release! 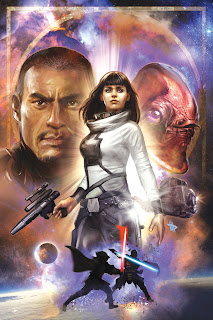 First of all, can you give us an idea of what to expect from Star Wars Legacy: Prisoner of the Floating World?

CORINNA SARA BECHKO: First and foremost, it’s an adventure tale. There’s a mysterious lightsaber, a lot of suspense, and a brash young woman who’s way out of her depth. We’ll also explore a little of what’s going on with the new Triumvirate Federation that’s now in control of the galaxy.

GABRIEL HARDMAN: We’re trying to strike a nice balance following up on aspects of John Ostrander and Jan Duursema’s Legacy run but foregrounding our story. This first arc primarily focuses of new characters in a backwater outer rim system who end up in trouble with a renegade Sith and on the run for their lives. Lucky for me since I’m the artist as well as the co-writer, this means I get to design and draw a lot of action!

Is this going to be an ongoing series, the likes of Legacy volume 2?

CSB: It is! The Star Wars universe is big and diverse, with endless storytelling possibilities.

The two of you are old hands when it comes to big name franchises and the success of Betrayal of the Planet of the Apes shows that. However, this is Star Wars.... STAR WARS! Does this make approaching the title any more daunting?

GH: It’s not daunting, it’s exciting! The fact that we grew up with Star Wars means we’re invested in that world and very motivated to explore it. And Like Corinna said, this is a big universe. We don’t want to just show the same old places. We want to go to new and lesser known worlds, see crazy new things. But we always check ourselves. Making sure it feels like Star Wars is the most important thing.

When we were initially conceiving the pitch, instead of only reviewing the Star Wars stuff that we already knew by heart, we read and watched a lot of things that were inspirations for the original movies. We re-watched Akira Kurosawa’s samurai films along with several others. We really wanted to get in touch with George Lucas’s earliest influences and bring them into our story. Of course, those movies are awesome and so much fun to watch. That research wasn’t exactly a chore!

Were you both Star Wars fans prior to the fact?

GH: Seeing A New Hope in the theater is one of my earliest memories. We wouldn’t be doing this job if we weren’t big fans.

CSB: Absolutely! I’ve loved all things Star Wars since I was a kid. But I never dreamed I’d get to work on a story set in the Star Wars universe.

How did you come about getting the gig? Did you pitch the story or were you hand picked?

GH: Editor Randy Stradley approached us at the Emerald City Con in his inimitable low key way and asked us if we were interested in doing a book for him at Dark Horse. We were more than interested. We felt that a Star Wars book would be a natural follow up to our Planet of the Apes books (which we’re still writing, by the way. Pick up Planet of the Apes: Cataclysm!). It’s like we’re running down a checklist of the nerdy things we love and working on them. When Randy told us we would be following up John and Jan’s Legacy, it was a little intimidating but we also felt like that era would be a great fit for us. We love the idea that we can push forward with new stories without walking between the raindrops of continuity as much as we’d have to on a book set in an earlier era.

You're introducing us to Ania Solo, the great, great granddaughter of Han and Leia. To the best of my knowledge, the Solo/Organa bloodline ends with Jacen Solo and Tenel Ka Djo's daughter Allana while Jaina Solo was childless and Anakin Solo died when he was 17 years old. Where does Ania fit into all of this?

GH: Ania’s lineage is a bit of mystery at the beginning of our story and it’s not one we plan to solve immediately.

CSB: I’ll just say that she’s definitely got that Solo spark. To say more would give too much away.

Sure, you can't give too much away but how does a child from the House of Organa wind up being a junker in the Outer Rim?

GH: How did she come from such a famous family and end up a nobody in the middle of nowhere? That sounds like a story to me.

CSB: For the answer to that, you’ll just have to read the series!

Will the series focus on the Outer Rim or will we be treated to various other well known locales?

CSB: The galaxy is a big place, so we’re going to go a lot of planets that haven’t been explored before. That said, don’t be surprised if you catch a glimpse of Coruscant… 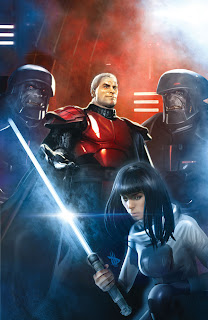 The Star Wars universe is already incredibly rich but how does it feel to put your own stamp on a property that means so much to so many people?

CSB: It’s a real honor! We’re always cognizant of how much Star Wars means to the fans (including ourselves) so we talk a lot about how to keep the spirit of the original films in every story we tell. It’s also a whole lot of fun.

GH: Putting our stamp on the vast Star Wars Universe in some small way is very important to us. But it’s equally important that stay true to it. If it doesn’t feel like a Star Wars story, it shouldn’t be in this book.

While bearing LEGACY in the title, will new fans of Star Wars comics be able to read the series without delving into the 50 issues of its forebear?

CSB: Definitely. New fans will be able to discover the world of Legacy right along with Ania Solo.

Speaking of the original LEGACY series, while entering the world of Star Wars must be daunting, following the footsteps of such prolific creators such as John Ostrander and Jan Duursema must be even more so!

CSB: Yes, quite daunting! The story John and Jan told over 50+ issues is so rich and epic that it’s rather intimidating to add to. Luckily we’re following different characters, so our story will complement theirs, not overwrite it.

GH: Following up John and Jan’s massive run on the book is definitely the most daunting thing. There’s no denying that they put an indelible stamp on this era. And I’ve been a fan of John Ostrander’s work since I read Suicide Squad as a kid. Hopefully we’ll manage a worthy follow up to their Legacy series.

Thank you both for your time. Being a long time fan of both of your works and the Star Wars universe has made me a very excited boy but March is so far away! How long until we get a preview of some interior art?

GH: That’s a question for our bosses at Dark Horse Comics. I’m very happy with the artwork I’ve been able to do on the series and I’m thrilled with the job Rachelle Rosenberg has been doing on the colors. I can’t wait for you and everybody else to see it.

Thanks again and may the force be with you.

CSB: And with you!