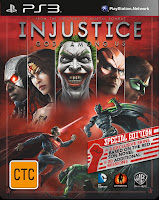 The Injustice news just keeps coming! This time we have confirmation of a SPECIAL EDITION which will be available exclusively from EB Games. Containing a range of content based upon fan-favourite Mark Millar's (Kick Ass) Superman: Red Son story.

Check out all of the details after the jump!

Warner Bros. Interactive Entertainment and DC Entertainment today unveiled details for the Injustice: Gods Among Us Special Edition. The Australian package, exclusive to EB Games will be available from April 17th, 2013 in limited quantities for the Xbox 360® video game and entertainment system from Microsoft and PlayStation®3 computer entertainment, and will retail for $79.95.

The Australian Injustice: Gods Among Us Special Edition will include:

Ø A copy of the game