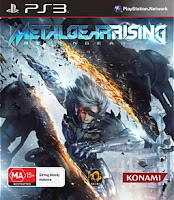 Set four years after Metal Gear Solid 4: Guns of the Patriots, Metal Gear Rising: Revengeance is a different kind of beast. Instead of towing the Metal Gear line, Revengeance focuses less on stealth and instead ups the action to epic proportions. Sure, you can skulk around in the shadows to your hearts content but you'll be missing many of the coolest aspects of the game. Plus, a big bad bovine AT-ST will end up stomping on your skull.

It should be no surprise that this game's as cool as it is purely due to its pedigree. Over the last 25 years, Metal Gear masters Kojima Productions have built an expansive and well fleshed out universe. Add to that development by Platinum Games, makers of the critically acclaimed Bayonetta and Anarchy Reigns and you've got a match made in heaven. Kojima have injected their trademark focus on futuristic fascist military domination and arrived at a place in which gameplay and cinematics converge. Gorgeous cut scenes are peppered throughout and add to the overarching story of a man, fighting with his demons both internally and its physical manifestation in his barely human form. Raiden looks incredible with  designs that are quintessentially Japanese, detailed, over the top and incredibly cool. While Kojima Productions have established themselves in their particular area, Platinum Games deserve a great deal of credit for putting their own stamp on the game in terms of the game mechanics. One of the greatest in game features is the "Zan-Datsu" system (斬奪) which is a special kind of slo-mo kill mode which, if done correctly, refills your HP and the "blade mode" gauge. This is done by slicing through a particular target then snatching the cyborgs blue, HP laden spine. Blade mode is a tonne of fun and allows the player to either chop enemies into confetti or be more delicate, slicing off a valuable limb. This is all achieved with nothing more than the flick of the thumb pad and a finger on the bumper. Each kill, successful or otherwise, goes towards an overall battle ranking which in turn will award you with points that can be traded in for special equipment and upgrades. Every time you get the Zan-Datsu right is a little bit of a geeky triumph, knowing that you're getting closer to buying another move or weaponry.

Revengeance, MGR, Metal Gear Rising or whatever you want to call it is an awesome Japanese action film, but you get to play it. How, in any alternate universe, could that be a bad thing? It's not. At certain points in the game I found myself reminded of Ryuhei Kitamura's VERSUS in the sense that its action sequences are emotionally charged and seemingly never ending. The fight mechanics take a little to get used to but if you've played Batman: Arkham Asylum, you'll be well versed in the parry system which is an integral part of successful combat. The opening tutorial and virtual training exercises will see you in good stead by teaching you the basics. While not everything is explained, enough is disclosed to get you through the opening levels at least.

The only downside to the game is a persistent issue with the camera which has a tendency to spin out, especially when action gets intense. This is but a minor blemish in what is an overwhelmingly enjoyable game. Visually, you won't find many games that are quite as polished. Each level is more epic and intense than the last and every character painstakingly designed. The hours spent hacking and slashing are interspersed with God of War style action sequences that almost feel like a mini-game. It's in these moments that the game feels most cinematic, like it's begging to be made into an anime film (c'mon Production I.G!).

While killing cyborgs will take up the bulk of your time, even spine rending slash happy fun time will always give way to chopping up trees, motor vehicles and other inanimate objects. After all, it's the little things in life.

Metal Gear Rising: Revengeance is available on PS3 and XBox 360 from February 21st.