An epic fantasy series of graphic novels, Ravine is set to take the comic world by storm and lucky for us both Šejic and Marz took time to speak with us about the book.

Check out our interview after the jump! 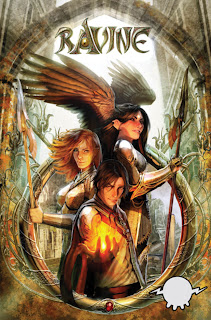 Ryan: Can you give us a quick overview of what we can expect from Ravine?

RON MARZ: It's a 160-page original graphic novel, the kind of thing that is always branded epic fantasy. It's a completely new fantasy world with a large story and a large cast of characters. If all goes as planned, we'd like this to eventually be a series of a dozen graphic novels.

Generally when we see that Ron Marz and Stjepan Šejic are working on a project, we automatically assume that Marz will be writing and Šejic on art. How is this project different?

RM: This is a story that Stjepan has been crafting for a decade now, and the expansive nature of the story really shows that. He's created this world, and I'm coming in to write the dialogue and kibitz on the story. It's a creator-owned project and we're co-owners, so I'm very much invested in this world.

SŠ: I couldn’t have said it better myself. No, I literally mean that, that is why I have Ron to say it for me hehe. 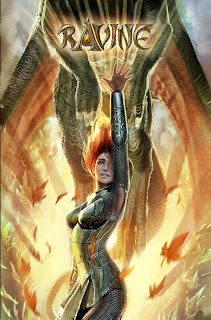 High fantasy is a genre that, by its very nature, needs to be presented on an epic scale. Have you approached RAVINE differently to your other books to achieve this effect?

RM: Well, the obvious difference is that we're doing this as entire graphic novel, rather than serialized in monthly comics. There's so much story, it really demands to be told in this format, rather than doling out 20-page chapters.

SŠ: Ravine is a series of twelve graphic novels... for start. By its nature, graphic novels are a far better medium to tell such a story. With graphic novels you have more room to devote to characters. See, your average comic has your basic issue structure of a buildup, then a few pages of character moments, then the climax and/or cliffhanger.

For this very reason writers are limited to just what they can do with the characters. Graphic novels, however, allow you to truly spend some time with the characters, and develop a world. For fantasy and sci-fi genres this is often crucial. Not always, but often

Is this also the reason that you went straight to the graphic novel format?

RM: Sure, but in a very practical sense, Stjepan already had 120 pages of art, plus all these designs, maps and illustrations that make up the "DVD extras" in the volume. With that stack of material already in hand, we could put it out all at once.

SŠ: That, and I genuinely hate the 20 page format comics. I never found them to be a satisfying read. I like my books on the chunky side 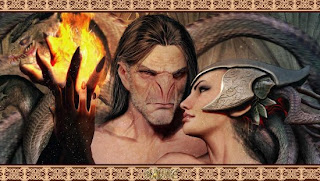 You've previously mentioned that you both share the same viewpoint and sensibilities when it comes to the fantasy genre, how so?

RM: First and foremost, we're both fans of it. We grew up on different continents, but we grew up reading the same things. We both have a real affection for the genre, and a determination to tell stories within it. I've been fortunate enough to write some previous fantasy material, but this is Stjepan's first chance to really indulge his passion.

SŠ: What Ron said, plus additionally there is the attitude that the fantasy genre needs to be character driven. And there is the fact that in this genre the world is as much of a character as any person written.

The first volume is being released in February with a view to release a number of volumes per year. What sort of break can we anticipate between volumes?

RM: We're planning on putting out Volume 2 this summer, since Stjepan is already closing in on completing the art for it. After that, we'll see how the schedule goes. Ideally, we'd like to do at least two volumes a year, and hopefully even three, but a lot also depends on sales.

SŠ: That is pretty much it, three issues per year, so it is a four year run for the first story, and if people respond to it, what can I say, we are both dedicated storytellers, and there is at least two different stories ready to take place in the same world. 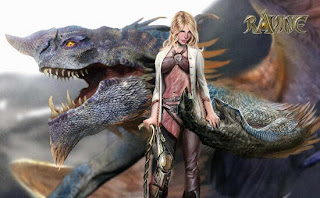 Stjepan, your work on Artifacts has always been A-grade but the Ravine images that have been released so far are on another level entirely. Have you changed any of your usual methods? The dragons especially almost look like CGI!

SŠ: Ravine is the driving force behind my artistic progress both in the way of drawing skills and drawing techniques. Ever since I was a teenager I was obsessed with special effects creators, creature studios. I spent most of my high school creating sculptures of movie monsters. With the advent of 3d and its accessibility I learned a very intuitive program called zbrush. In it I could apply the techniques I learned in real life. So now I approach the making of Ravine as one might approach making a movie. There are drawn characters and then there are self-made models of dragons, armor, things like that. All combined together to give me the creative output that enables me to do Ravine, a monthly book for Top Cow, Sunstone, and several other projects at the same time.

For those curious of my work methods and techniques, drop by my YouTube channel.

There you can take a closer look at the magic behind the magic.

How different is it approaching a your creator owned story compared to a Top Cow property?

RM: Honestly, it's not all that different, because Top Cow allows us an amazing amount of creative freedom on their books. You don't really get that level of freedom on a corporate comic or some licensed properties, but Top Cow has always been very creatively empowering. That said, doing your own thing, creating your own book, is always the best experience. You're completely in charge of what you do and how you do it and you're not beholding to any past continuity or established parameters.

The reason for this is simple. I don’t use references. Any story taking place in the contemporary age contain some recognizable things. I usually just kind of draw them from memory, but every now and then a specific thing is required. A landmark, a monument, a building that is iconic and recognizable. Then it is reference search time.

With fantasy that is a non-issue. I create every aspect of the world. Free to design to my heart's content.

Many thanks to you both for taking the time to speak with me! Needless to say, I can't wait to get my hands on Ravine when it hits spinner racks.