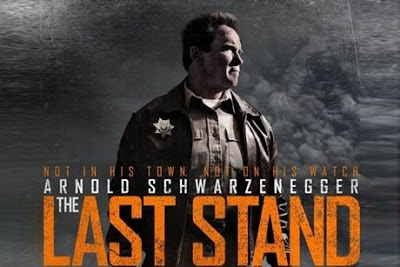 Maybe it’s his own fault … maybe it is Hollywood’s … but somewhere along the way I suspect we’ve all had a hand the in the spectacle that is Arnold Schwarzenegger’s career. The moment we let a man in front of a camera because he could lift heavy things, chase ladies and eat baby chickens for breakfast, we were in trouble. Arnold Schwarzenegger is living proof that Hollywood can make a star out of anyone. His latest film, The Last Stand shows that he can still make a schlocky cringe-worthy film. The former Californian Governor plays Sheriff Ray Owens, forced to protect his town from a notorious Mexican Cartel boss, Gabriel Cortez (Eduardo Noriega), who is on the run after escaping custody.

I’m inclined to say it’s a horrible film. Visually it gets a pass. The problem is that I’ve seen most of it before in a little time period known as the 1990s. Which makes matters worse since this was just a rehash of the usual action film tropes, with no lessons learnt from the past. It blows my mind that filmmakers don’t use better films as a blueprint for theirs. Action films are fairly straightforward: take a relatable protagonist and set him against an unstoppable force. Throw in a few explosions and a few witty one liners and I’ll go home satisfied. It’s simply alarming how wrong The Last Stand gets it. First and foremost the biggest complaint I have is the atrocious script. To say it was laughable is a generous understatement. A quick peek at the writers’ credits reveal three credited writers (although culprits may be a more apt term). I can’t fathom how this script got approved with three seasoned writers looking at it. It’s as if they had a competition for who could string along the cheesiest clichés. I can’t quite remember the last time I saw exposition delivered as clumsily as this. Nearly every character started each sentence with a blunt updating of the plot or brutal piece of background information. This is a Schwarzenegger film; not a highbrow political thriller. It didn’t need all the pointless plotting. Remember, relatable good bad meets tough bad guy. 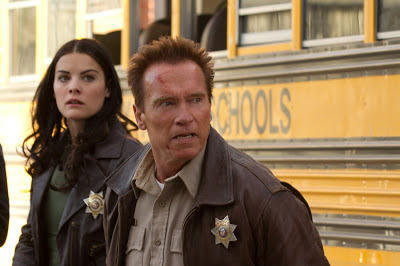 This is Korean director Jee-woon Kim’s first big Western film. Coming off the success of his sadistic thriller I Saw the Devil (2010), the film is shot competently for the most part but I had some issues with the action set pieces. They all seemed too staged; I know that sounds strange for a film, but there were too many sequences shot on empty highways or in the abandoned town at the end of the film. Too many of the sequences felt like they were shot at 3am in the morning to ensure empty streets. The direction added to the 90s flavour, most Western action films over the past decade have moved towards a grittier realism to give impact. This is possibly in response to the extravagance of the films starring Schwarzenegger and his cronies. It would seem that Jee-woon Kim and his countryman cinematographer Ji-yong Kim were raised on plenty of 90s action films and their tastes never really matured. Sadly The Last Stand just reminded me of films I’d rather watch like S.W.A.T, Welcome to the Jungle or Bad Boys.

The only thing that can make a bad script even worse for me is watching it get delivered by actors I love and respect. My heart sank a little watching Forest Whitaker in this film; I liken it to watching a former champion boxer let people punch him for a buck. Too many times I wanted to scream “you’re better than this”! I wanted to remind everyone in the cinema of his performance in The Last King of Scotland which won him the Oscar. But here he is, playing an FBI agent whose only purpose seemed to be giving his subordinates impossible demands and losing his temper. My man Luis Guzman phones in yet another performance as the Latino comedic relief, which would have been funny if we hadn’t seen it way too many times before. Johnny Knoxville comes along for the ride as crazed gun enthusiast Lewis Dinkum. I usually like it when Knoxville turns up in films, but here is just looks like poor casting in order to get him to pull of a jack ass style stunt (Speaking of which all those painful gags look like they are starting to take their toll on poor little Johnny). He doesn’t need to be taking falls to get laughs. Perhaps a more appropriate casting option would have been South African genius Sharlto Copley (District 9 and A-Team). 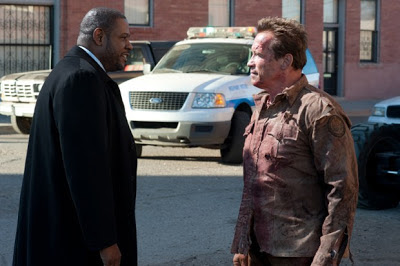 But in every arsenal there’s always a big gun and Arnold Schwarzenegger is probably as big as they get. Is this is a successful return to cinema or just more of the same? Hard to say really, I’ve never been a big Schwarzenegger fan. For me, I never really got over the fact that he is a poor actor. I know he’s made some iconic action films but they were of a specific time and place and hold little relevance for modern cinema. Cast your mind back to the opening sequences of Predator (1987), when we first meet the crack commando unit, all bare-armed and over-the-top bulging muscle types, compared with the commando team in Zero Dark Thirty (2012) who are grounded, multi skilled, and efficient. Times have changed and we demand more now from our stars. The likes of Matt Damon, Joseph Gordon Levitt and Christian Bale (when not screaming at crew members) have an appeal which resonates with audiences. I respect the fact that this is rather toned down performance by Schwarzenegger, at times even with tongue firmly lodged in cheek. He’s like an ageing rocker who still knows how to belt out the classics, but sadly no one is listening. I hope he gets a few roles to go out gracefully. Would seem it’s time for the big fella to make way for the younger bucks.

The Last Stand is a run-of-the-mill action film which brings absolutely nothing new to the genre. It is clearly just a vehicle to get Schwarzenegger back into the business and everyone involved appeared to be going through the motions accordingly. For fans of big Arnie, they may enjoy a dose of nostalgia but you’ll soon realise you’re watching an old man hobbling around the screen. Don’t waste your time with this one. 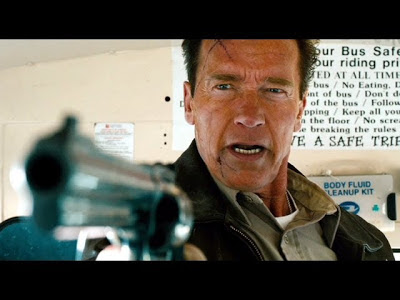