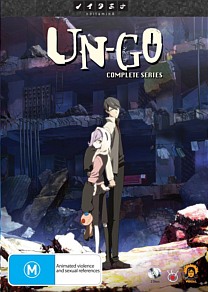 Nowadays, it seems as though anime series' find it difficult to play things straight. That is to say that, it's becoming increasingly difficult to find a series that is a straight laced detective story, action adventure or just a plain old comedy. Such is the same with Un-Go. Instead of being a plain old detective story, it is infused with a healthy dose of the supernatural.

He pursues his job as the "Last Great Detective". Others call him the "Defeated Detective". What's certain is that he's Shinjurou Yuuki, a young man with a passion for mysteries and a talent for solving them which has made him the target of dark forces now stirring within the sinister underworld of a near future Tokyo.

That could prove lethal, given that not even the other "good guys", including the police, are exactly on Shinjouro's side.

Fortunately Yuuki's not completely on his own, and with the aid of his uniquely talented associate Inga, he's ready to cut a swath through the veils of secrecy that have been laid before him.

Get ready for mind against matter and a lot of cloak and dagger as the ultimate battle of clue and deduction begins in UN-GO!

The story behind Un-Go is an incredibly interesting one. Loosely based upon the life and work of Japanese essayist Ango Sakaguchi, Un-Go delves into the lives of decadent public figures before delivering verdicts that are most suitable for widespread release. This is as far as the history lesson extends. Apart from the title and the main characters efforts in exposing corruption, there is no real acknowledgment of the source material. Regardless, Un-Go manages to deliver a handful of mysteries that will intrigue and surprise. Sadly, the most intriguing mysteries aren't those that arise by murder, but instead the ongoing mystery of how and why Yuuki and Chariman Kaisho arrive at such completely different conclusions on each and every occasion.

The series' focus on a "mystery of the week" format leaves very little time for character building and by the 3rd of 4th episode you start to wonder whether you'll ever actually get to know the quirky cast of characters. In fact, the lack of character progression and interaction reduces any form of threat or conflict to the characters themselves. Instead, they are surrounded by death and destruction and always walk away without a scratch.

The animation quality starts off at a very high standard, a standard to which you can expect from Studio Bones. Soon after the first few episodes, however, the animation quality drops a touch but not to the point where it becomes poor quality. Just not the great quality that it started at. Characters appear to be a bit more stiff and the animation becomes less fluid. The character designs too are uninspired. All of the characters, save for Yuuki's supernatural cohort Inga, are unremarkable and unmemorable.

All complaints aside, Un-Go is an enjoyable experience albeit it not a very memorable one. The supernatural thread that runs through the entire series is intriguing although ultimately offers nothing to the story. Un-Go begins with so much promise before withering away to eventual nothingness.