I’m not a fan of horror films. Be it the relentlessly gory slasher flick, the in-vogue zombie apocalypse tale or the traditional haunted house formula, the genre has never appealed to me. I’d like to say it’s due to my being reared on a diet of slapstick comedies and classic Hollywood flicks, but really it’s because I’m a great big wuss.

So, it was with a great show of mettle, that I put aside my trepidations and dared to enter the world of Mama, the latest film by Andres Muschietti, based upon his short film of the same name released in 2008. Mama follows two young girls, Victoria and Lilly, who are abandoned in a spooky forest after the death of their parents. They are found five years later, thanks to a rescue operation orchestrated by their Uncle Jeffery (Nikolaj Coster Waldau), and resume a normal life under the his guardianship and that of his girlfriend Annabel (Jessica Chastain). But all, of course, is not what it seems … 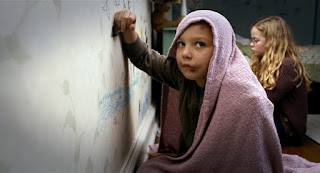 I enjoyed this film without being necessarily thrilled by it. The performances were very strong, especially the two young girls. Megan Charpentier’s Victoria had the greater emotional arc to convey, however Isabelle Nelisse had a more physically challenging role, since her character moved around on all fours, like a chimpanzee, after having her development delayed by a five-year stint in the forest. A child moving around in this manner is disturbing and enthralling imagery – it really worked. Also, I truly believed that these two girls were sisters, mostly by the smaller moments they shared – the meaningful looks, the playfulness and obvious tenderness. Jessica Chastain proved again masterful, and showed that she can jump from genre to genre with ease. Whatever she does, she exudes class and honesty as a performer. She has appeared in a staggering 12 films in the past three years and yet she is far from being over-exposed.

Andres Muschietti is no slouch behind the camera. I would liken his style to that of David Fincher (Fight Club, Panic Room), in that the set design allowed the camera to pan seamlessly from one room to another, as if through a wall, instead of cutting the shot in one room and beginning a new scene in the next. I find this technique very effective when trying to convey the terror of something occurring in one room, next to a room of relative calmness. I also loved a sequence, used during the introductory credits (but after the film’s initial scene), consisting of a montage of children’s drawings depicting what has occurred to the girls over the five years that they have been alone in the woods. It was a very well-crafted piece of exposition and the portrayal of morbid themes in childish cartoons was a chilling contrast.

Like JJ Abrams’s Super 8, Mama suffered because it didn’t handle its threatening element correctly. Whilst this may be a spoiler of sorts, this film contains a supernatural element which is terrorising the family. The antagonist in question is hidden for so long that, when the reveal comes, it doesn’t really live up to the hype. The film sets a series of rules for the spook which seem to change as the story requires them to. On some occasions it can only appear through a particular portal, then it can travel through electricity wires and ultimately can get inside a computer and leave messages on the screen. For horror to work, there needs to be set boundaries and rules to operate within, otherwise it starts to feel ridiculous. Sadly, Mama makes the rules only to break them the very next scene. A film like The Woman in Black from last year is a far better example of maintaining the rules for the entire film.

Mama is an enjoyable film which at times dabbles too much in the ridiculous. There are moments of real terror however they aren’t consistent enough to be too effective. Mama is worth the price of admission though to see two potential stars of the future.

And yes I still sleep with my night light on … but that’s only ‘cause teddy gets scared.

Mama hits theatres on the Thursday the 14th of March. If you agree or disagree with my review please feel free to leave your comments below.