Injustice: Gods Among Us PS3 Review 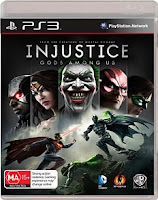 For quite a while now, I've been banging on about how excited I was about the impending release of Injustice: Gods Among Us. Well, the wait is over. Released but days ago, I finally got my hands on this bad boy and one thing's certain, this is one ridiculously fun game.

Ridiculous is a particularly apt word to use. After all, we're talking about a game in which you take on the godly powers of some of DC's best known heroes and villains. Powers that can see you literally punching your opponent to the centre of the earth.

Sure, I'm still salivating over the awesome looking Collectors Edition, complete with Batman vs Wonder Woman statuette, but the stand alone PS3 ain't none too shabby either.

While Injustice is its own beast and entirely stand alone to previous NetherRealm games such as Mortal Kombat and Mortal Kombat vs DC Universe, it certainly contains many of the same hallmarks as previous MK games. Hallmarks such as the controls, as soon as you pick up the controller, you know that this is a NetherRealm game. The controls in particular aren't quite as forgiving as in Street Fighter and Tekken, the latter of which is a button mashers dream game. The controls in Injustice feel far more deliberate than in many other games and during certain challenges, can feel like you are playing a mini-game or even Guitar Hero. Commands need to be enter in a sequence and almost rhythmically. NatherRealm have done a fantastic job of balancing the combat system so that Superman doesn't just trounce each and every combatant in his wake. Each character has their strengths and weaknesses which make them more or less threatening to others. That said, you really need to check your cynicism at the door and just enjoy.

Thankfully, NetherRealm have done more that just re-skin Mortal Kombat with well known DC characters. Instead, they have created a game that tells a story which, whether you're a comic book fan or not, will add to what could easily been a stock standard, button mashing beat em' up. While the story holds absolutely no weight in the actual DC Universe, comic book fans will still have a blast controlling their favourite heroes and villains. There's nothing quite like beating down on The Joker when playing as Batman or vice versa. Although comic fans may not find an alternate reality or parallel world to be of particular interest, the game does benefit from Tom Taylor's tie-in comic book which you'd know, if you've been on the Twitter machine lately, has been tearing up the digital comic charts for months now.

The story mode is a tonne of fun and allows you to sample a great deal of the core characters including Bats, Cats, Big Blue, WW and GL among others. The story mode will walk you through a series of progressively more difficult levels. Once done with the main story, you can always indulge in S.T.A.R Labs missions which will see you battling villains, saving civilians and other such heroic deeds. The pay off for your hard work comes in the form of unlocks, unlocks such as game cards and icons to pimp out your gamer profile card. Further to this, there are a number of costume unlocks and 3D model unlocks that we keep you interested enough to keep on keeping on. If you're an achievement or unlock ninja, you'll gain many more hours of game play than those who play the story alone.

Sure, the plot is rather silly and at times a little incomprehensible but Injustice is still a whole lot of fun. As a comic book fan, playing around as one (or many) of my favourite heroes is a real buzz. Being able to trade blows with Luthor, The Joker and Doomsday never gets old and the destructible backgrounds are the icing on the cake. It feels as though there is always something happening. Every punch, kick, elbow and headbutt seems to trigger some form of chain reaction in the background. This in itself adds to the overall effect of the game and truly makes it feel as though these are Gods who have locked horns, immortals.

Also available is the Injustice comic book series by Tom Taylor and a tie-in iOS game which also unlocks a number of skins and other goodies. 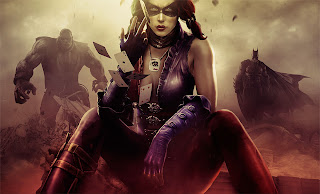