Madman are bucking the trend this year by holding their biennial anime film festival only 1 year after the last! Are we complaining? No. And neither should you.

Last year saw the release of From Up on Poppy Hill, Children Who Chase Lost Voices, Wolf Children and Berserk: The Egg of the King.

This years line up is looking to be a MASSIVE one with the first announcement knocking everyone's socks off.

Madman Entertainment are proud to announce that the REEL ANIME theatrical event will return to Australia and New Zealand in late 2013, and headlining this year’s exciting program will be the third film in the EVANGELION rebuild series, EVANGELION: 3.0 YOU CAN (NOT) REDO. 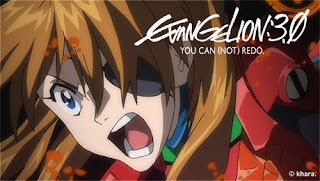 EVANGELION: 3.0 YOU CAN (NOT) REDO will lead a stellar line up of four of the best new animated feature films direct from Japan. Program dates and further films for REEL ANIME 2013 will be confirmed during the next three Australian Supanova Pop Culture Expo events - Gold Coast (April 19-21), Sydney (June 21-23) and Perth (June 28-30).

Traditionally a bi-annual event, 2013 will mark the first time REEL ANIME screens as a yearly program. REEL ANIME 2012 ran from September 13-26 in Australia and late November/early December in New Zealand. The program included Studio Ghibli’s FROM UP ON POPPY HILL, Mamoru Hosoda’s WOLF CHILDREN (winner of the prestigious ‘Animation of the Year’ 2013 Japan Academy Prize award), Makoto Shinkai’s CHILDREN WHO CHASE LOST VOICES and the first film in the new Berserk Golden Age Arc trilogy, BERSERK MOVIE 1: THE EGG OF THE KING.

REEL ANIME 2013 will screen in selected cinema locations across Australia and New Zealand.