The Perks of Being a Wallflower (DVD) Review

Every now and then a film comes along that renews your confidence in cinema. The sort of film that manages to elicit a response beyond the visual and auditory spectacle of a big budget action film or guttural grittiness of a well executed indie film.

There was a sizeable amount of buzz around the release of The Perks of Being a Wallflower and while I may be a bit late to the party, I just couldn't refrain from sharing my thoughts on this film. This comes at a time when I, as a hack of a writer, have been finding it difficult to write. I've been feeling as though I'm treading water. Surrounded by people who are infinitely more talented than I could ever hope to be, I've struggled to find the time to write. In a paragraph full of heartfelt honesty, I should instead state that I've been struggling to make time to write. The Perks of Being a Wallflower has reinvigorated my love for cinema and more specifically, my love for the art of storytelling.

Based upon the coming-of-age novel by American author Stephen Chbosky, Perks tells the story of 15 year old Charlie, the eponymous wallflower. Quiet by choice, Charlie lives his life on the social fringe observing the inner workings of high school life as though it were the cross section of a bee hive. This teenage anthropologist is soon swept into the loving embrace of fellow "psychos" Sam and her gay step-brother Patrick. This unlikely trio, inspired by music, cinema and all of the other great things in life, go through a series of heart wrenching experiences which are guaranteed to elicit the full gamut of human emotion.

In a frank admission, I am completely unacquainted with the source material but that matters not. This film, this beautiful piece of cinema should be considered a benchmark for all that are to come. Not since Little Miss Sunshine have I felt so strongly for a film and its characters. Stephen Chbosky is undoubtedly an incredibly talented author, nobody gains a cult following in literary circles without at least some semblance of talent. Thankfully for film fans, it appears that he is equally at home in the directors chair. Taking the helm on this project seems to have brought about a purity that other adaptations may lack. This purity is most obvious in the characterisation of Charlie, Sam and Patrick. Each of these kids, children on the verge of adulthood, display such an innocent and carefree facade which masks the emotional tragedies that they have each faced. Like balancing the salty, sweet and sour of a well cooked meal, Chbosky has given these characters a depth of flavour and draws upon such pain and suffering to heighten the beauty of their stories.

The casting in this film is pitch perfect and is filled with some fresh talent as well as more well established actors. Charlie is played by Logan Lerman, a young chap who is best known for playing the lead role in the Percy Jackson franchise. In one performance, Lerman has shown a versatility and emotional range that belies his relative inexperience. In a paltry 100 minutes, Lerman transcends from being a troubled and disturbed child to an emotionally free young man after blossoming thanks to the sunshine exhibited by his new friend Patrick. After impressing audiences in We Need to Talk About Kevin, Ezra Miller reaffirms his talent as the larger than life Patrick. Being a teen is horrible. Being an openly gay teen must be damn near impossible. Miller manages to be camp and yet subtle at the same time. His over the top persona hides an internal struggle that, again, makes for a beautiful character. It also helps that he is impossibly good looking, like the lovechild of Keanu Reeves and Justin Long, smulderingly handsome with the devils tongue and the wit to match.

A very special mention goes to the delightful Emma Watson. It's odd to literally watch a child grow up before your very eyes before escaping from her Potter woven cocoon, a beautiful and deeply talented young actress. Not only does she put on a very convincing American accent but she also exudes a vulnerability that perfectly matches her character, Sam, and delivers a subtle yet powerful performance. Finally, Paul Rudd gives the performance that I've been waiting for. While he is every bit as charismatic in this film as any other, he dispenses with his comedic roots and gives a glimpse at the dramatic actor within. This single performance makes me hope that we see more of Rudd in more serious roles. 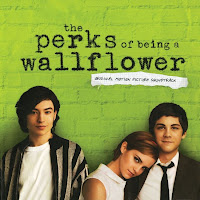 A character in its own right, the soundtrack in this film is a beautiful homage to the emotional aspect of music and its ability to inject emotion and bring people together. While I'm led to believe that the music from the novel and the movie differs slightly, the overall genre types and time periods are intact. As a teenager I was as awkward as any other. I felt desperately out of place and suffered through a whole lot of angst. While I relied on a sense of humour and bravado that belied my true feelings, one thing that was a constant comfort was music. I would spend many a lunchtime with friends in my high school music room, jamming or just listening to our newest find. Back then it was an effort to find new/old music. I would record the radio, sitting by a cassette deck with my fingers on the play and record buttons waiting for a Prince, Devo or Black Sabbath song. Otherwise, I'd scour second hand stores for cassettes and LP's or even my dad's record collection. Hearing David Bowie's "Heroes" struck an especially emotional chord with me. For any problems that my father and I had through my formative years, we always had music, especially Bowie, in common. Music is a universal constant and the Perks soundtrack is universally incredible.

The Perks of Being a Wallflower is a beautiful, poignant and near faultlessly executed film, the perfect blend of Dead Poet's Society and The Breakfast Club. Thank you to Mr Lerman, Mr Miller and Ms Watson for such beautiful, delicate and heartfelt performances. An especially large thank you to Mr Chbosky for his novel and subsequent film. This film, this single film, has inspired me to an extent that you will never realise and a re-iginited the fire in my belly to tell stories to anyone who will listen. I can feel again.