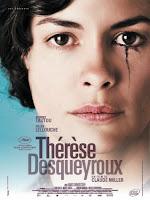 Thérèse Desqueyroux, the latest film from Claude Miller, initially left me feeling irresolute in my opinion of it. I walked away not entirely sure what it was I was feeling. But the further I walked, the more I came to appreciate the subtleties of what it had achieved; my contemplative response to it being chief amongst them. It’s a film that really gets you thinking and stays with you long hours after the credits roll. At first blush, it’s a tale filled with largely self-interested characters that are difficult to sympathise with, but with time it blossoms into a far richer human story.

Thérèse Desqueyroux is adapted from the novel of the same name by Francois Mauriac. Set in 1926 rural France, it centres on a marriage which unities the two wealthiest families of the region. Thérèse (Audrey Tautou) weds Bernard Desqueyroux (Gilles Lellouche), thus making them the richest pine farmers in the region. Thérèse, however, is consumed by a lack of fulfilment and other assorted demons, and eventually resorts to a desperate act in order to escape.

Originally, I struggled with the fact that the characters weren’t particularly likable. That’s not to say they weren’t engaging or entertaining, there just wasn’t much to latch onto.  This is the world of the extremely rich farm owners who are only interested in maintaining their lifestyle. Thérèse is plagued by fact that she wants a life in the city where she’ll have cafes, noise and meaning in her life. Bernard only wants children. Their marriage is born out of a good friendship, rather than any sense of longing or passion. It’s easy to see how Thérèse would become so disheartened. I recently watched Gone With the Wind for the first time and I was surprised that for a classic film I had a similar reaction. There just weren’t any characters I could sympathise with. Interestingly the two films share many things in common; a strong female lead, alpha male performance and the rural background with all its customs and traditions.

What I mistook for limited character development was just my own initial laziness as a filmgoer. I’ve been spoilt by heavy-handed Hollywood film-making; expecting character arcs to be life changing ordeals to make impact. I often bemoan the fact that Hollywood films spoon feed audiences and here I was not at first able to appreciate what was before me. Whilst this film had a glacial pace at times, it oozed restraint and control – qualities which I admire in a film maker. I found that I was being allowed slow-release snippets of insight into the character’s feelings and motivations, not only to move the plot forward but to expose more of their natures.

I will forever see Audrey Tautou as Amelie, thanks her iconic performance. She has an almost cartoonish quality to her at times, maybe because of those big beautiful eyes but also in part to how she carries herself. I enjoyed her playing something different to her usual manic-pixie-dream-girl shtick. She explores very dark places and conveys the inner turmoil that someone suffering from mental illness endures. Gilles Lellouche, simply put, is a French Liam Neeson. He’s big, broad and brooding with great screen presence. This is my first exposure to Lellouche and I would like to track down a few more of his films just to see what else he can do.

Being set in the Landes Region of France, which is the south west corner of the country, the landscape is stunningly picturesque. There are several scenes of characters walking through forests hunting rabbits and birdlife, adding to the overall rural flavour. The costume design is fantastic; the individuals responsible certainly had a ball dressing everyone in head-to-toe in fashions of the day. I loved the old estates that were used, adding so much authenticity to the setting.

By no means am I under the impression that this film is for everyone. It’s dripping with the flavours of French cinema and at times can be slightly challenging, but this shouldn’t warn you off. This is the film you trek all the way into Newtown for. So when you come out of it you too can walk that long walk letting this beautiful little number unveil itself to you.
2013 Anais Demoustier Audrey Tautou Claude Miller GeekOfOz Gilles Lellouche Review Stu's review Thérèse Desqueyroux