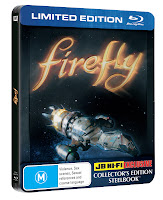 It's been a long time coming. One of the most highly regarded sic-fi television series of all time has finally made its way to Blu Ray and geeks everywhere are excited!

Cancelled before its time, Firefly is something of a legend in geek circles and its cancellation after only one season has seen anger, tears and even a handful of conspiracy theories. Regardless of how saddening that fact is, ONE very special, limited edition steelbook Blu Ray copy of Firely is up for grabs thanks to 20th Century Fox Home Entertainment.

All you have to do is follow on after the jump and fill out the form and you're in with a chance to win one of of these titles which will be chosen at random! Don't forget, you can score yourself an extra entry just by following us on Twitter or liking us on Facebook!

Entries close 11:59pm on Saturday 13th April 2013. Your details will not be used in any way other than for the delivery of your prize. Geek of Oz and 20th Century Fox do not take any responsibility for the loss, damage or delay of/to prizes sent to winners (blame Australia Post for that one). The judges decision is final and no correspondence will be entered upon. One entry per person. Prizes are not redeemable for cash or any other kind of trading currency such as creds, latinum, sen, kan, zeni, double dollars or Ankh Morpork dollars. This competition is only open to Australian residents. Any questions or queries can be submitted through the comment section at the bottom of screen. Good luck!
20th century fox Blu Ray competition Competitions Firefly giveaway Joss Whedon Serenity Win