From what I can gather, American students see spring break as an opportunity to ditch their text books, morals and clothing and hit the nearest beach, basically converting it into Sodom and/or Gomorrah.  Spring break is so popular that it’s spawned an entire industry of film makers following drunken almost-women around as they debase themselves. Spring Breakers, the latest film by provocateur Harmony Korine (Trash Humpers, Gummo), follows four friends who risk everything just to join the party, but ultimately each getting far more than they bargained for. Korine skewers the spring break dream with a bitingly cynical look at a generation of lost souls all searching for their meaningless fifteen minutes of fame.

Spring Breakers will offend people. In fact I predict the opening credit sequence alone will have people questioning why they slapped down their hard earned cash. We are treated to a montage of topless women bouncing around on a beach, jock quarterback types holding beer cans at their groins to simulate urinating into a woman’s mouth and a shot of twelve or so bikini-clad teens practicing fellatio on their ice blocks. To make matters worse, it’s all glossy, stunningly photographed and all highly exploitative. You’ve got to admire the courage of a director who comes out guns-a-blazing leaving no one wondering what the film will be about. It’s about sun, sex and booze. Got that?! Good, because you’re going to get sick of all three by the time this film is done. ‘How is that possible?’ I hear you say. Simply put, the film harnesses repetitive imagery to strip away the glitz and glamour of the party lifestyle and shows how destructive it can be without becoming a melodramatic midday television movie.

The film focuses on the efforts of four friends making their way down from college to the spring break action. Candy (Vanessa Hudgens), Faith (Selena Gomez), Brit (Ashley Benson) and Cotty (Rachael Korine) have pooled their savings but sadly come up short of the required funds. Naturally, their only option is to rob a fast food restaurant, which goes off without a hitch and funds their adventure. I loved this: the lure of spring break is so great it will corrupt people to such an extent that they will risk all for sun, sex and booze. One the girls hit spring break there’s no holding back.

Much has been made of the casting of this film. Namely because of the ‘Disney princesses gone bad’ angle that the marketing has taken. Selena Gomez and Vanessa Hudgens especially impressed me. Gomez’s Faith seemed to have been given the more challenging role as the moral compass for the quartet. Vanessa Hudgens excels playing the outrageous Candy; albeit a far showier performance, it showed just as much discipline as Gomez. Begrudgingly I have to recognise that the true stroke of casting genius is that of one Mr James Franco as the drug dealing hip hop extraordinaire Alien. I have a long and tortured love/mostly hate relationship with James Franco. This stems from the fact that he is wildly inconsistent and often looks to be sleepwalking through his films. But when he gets the right role, all sins are forgiven. Korine uses Alien to perfection as a means to expose the seedy underbelly which feeds off the spring break scene. 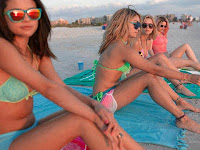 Korine skilfully flexes his muscle behind the camera, resulting in some phenomenally gorgeous cinematography which is complemented so well by the, at times, non-linear storytelling. Where some films employ humour to reduce the tension, Spring Breakers used repetitive images of bikini clad women to achieve an ironic monotony, suggestive of the absurdity of the whole spring break concept.

Harmony Korine has a reputation for shock which is well earned. I can’t think of many directors who would be as capable of pulling off this film in similar style and with as much precision. It weighs in at a skinny 94 minutes, but packs a big punch. The film boasts one scene in particular which alone was worth the price of admission. Let’s just say that it included James Franco, a piano, three women in ski-masks and iconic pop princess’s ballad. Let me stress, I’m not praising this film because of the women jumping around in bikinis acting outrageous. This film is a truly original, daring and challenging work of art which will definitely feature in my top ten of the year.