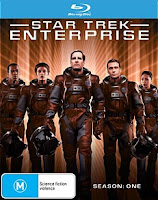 Those in the know would be aware that the prequel series, Enterprise, was known solely as Enterprise until season 3 in an attempt to somewhat distance itself from the franchise. This series was supposed to be a prequel to all that had come before it albeit one that would be accessible to an all new audience.

Unfortunately, in attempting to be all things to all people, Enterprise season 1 is somewhat of a technical failure. That said, it's a failure that I thoroughly enjoyed under the pretence of being a life-long Star Trek fan. While nowhere near as successful as JJ Abrams reboot, Enterprise was a great introduction to Star Trek from it's very beginnings.

Released hot on the heels of Star Trek Voyager's final season, Enterprise starts off with a bang. The double episode "Broken Bow" presents a slightly different Federation of Planets than we're used to. What we see is a fledgling world of spacefarers who, instead of actively seeking new life and new civilisations, are wary of making themselves known in the big, bad universe. Aside from the unofficial Human-Klingon first contact in The Next Generation season 6 episode 1, we witness the first meeting of humans and the warrior Klingon race in Broken Bow AND first contact with the freaky, shape shifting Suliban who wind up being the predominant antagonist throughout the season. While it's awesome to see the first contact between races, it felt as though the Klingon meeting was rather rushed and quickly forgotten. The Suliban, however, get a whole bunch of screen time thanks to their standing in the overarching "Temporal Cold War". Time travel is a plot device that rarely works and it doesn't particularly work in this instance either. Frankly, bugger all happens until the very last episode of season 1.

There are a few episodes that just don't work and appear to be trying NOT to be Star Trek but only seem to be more Star Trekky than not. Luckily, sub-standard episodes like "Terra Nova" and the HUH-worthy "Acquisition" are counterbalanced by the fantastic "Dear Doctor" and the wonderfully compact "Shuttlepod One". The reason that these episodes work so well is because they focus on telling a character filled story instead of zooming in solely on the incident. After all, this is an all new crew and we want to get to know them!

Of the cast, Scott Bakula is a standout. A sic-fi staple, Bakula positively oozes Captaincy. His rugged, good-ol' American boy charm is a great fit for the captain of a starship. His 2IC, Trip Tucker is played by Connor Trinneer. Relatively unknown before Enterprise, Trinneer brings a series of fantastic performances that highlight just how "human" the characters are as opposed to the often sanitary characters in previous series. Add to that Jolene Blalock as T'pol and you have a triptych of characters that offer a full range of emotion and inner turmoil. Star Trek has a long history of awesome Doctor's and John Billingsley as Dr Phlox is no different, he shines in every single scene that he's in with his quirky, unnerving yet always upbeat performances.

The effects in this season are fantastic and even though Voyager and Enterprise were filmed almost back to back, there's a noticeable difference in quality. That's not to say that Voyager was lacking, it's just that Enterprise took full opportunity of it's massive budget. Thankfully the powers that be decided to bring legendary production designer Herman F. Zimmerman back to the franchise. He and the Okuda's designed and created a ship interior that is both original and yet reminiscent of Kirk's Enterprise. In fact, the utilitarian aesthetic of the NX-01 makes the inaugural incarnation of the Enterprise look like the love-child of a Russian nuclear submarine and the NCC 1701. The external design of the ship garnered a whole lot of controversy when first released for looking too advanced. Unfortunately for designer Doug Drexler, his incredible design was actually maligned for looking TOO good! While I have a tendency to agree that the ships exterior does look rather advanced, it also looks awesome so no complaints from me.

Being shot in HD from the get go means that Enterprise season 1 looks gorgeous on Blu Ray. Add to this a whole bunch of special features and you've got a fantastic addition to any Trek fans collection. Among the special features are a series of candid interviews with creators Brannon Braga and Rick Berman. These interviews address a number of the issues with the series in a refreshingly honest manner with Brannon Braga particularly owning up to some gigantic errors in judgement. He refuses, however, to take responsibility for that god awful episode opener. That song truly needs to be burned in the Klingon fires of Kri'stak.