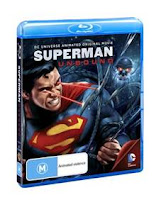 DC Universe Animated Original Movies are fantastic. This may sound like blanket statement and frankly, it is. Sure some of their movies have been better than others but overall they make a bloody good film!

The latest of which is SUPERMAN: UNBOUND. Based on Geoff Johns' Superman: Brainiac, UNBOUND pits the Man of Steel against an all but unstoppable force.

Follow on after the jump for more details, a look at the trailer and the low down on the awesome special features on the Blu Ray release!

A destructive force is devastating planets across the galaxy – with Earth next in its sights – and even Superman may not be capable of halting the terror in SUPERMAN: UNBOUND, the next entry in the ongoing series of DC Universe Animated Original Movies. Produced by Warner Premiere, DC Entertainment and Warner Bros. Animation, the all-new film arrives June 26, 2013 from Warner Bros. Home Entertainment on Blu-ray™ ($24.95 RRP) and DVD ($19.95 RRP) and for Digital Download.

Based on the Geoff Johns/Gary Frank 2008 release "Superman: Brainiac," SUPERMAN: UNBOUND finds the Man of Steel aptly handling day-to-day crime while helping acclimate Supergirl to Earth’s customs and managing Lois Lane’s expectations for their relationship. Personal issues take a back seat when the horrific force responsible for the destruction of Krypton – Brainiac – begins his descent upon Earth. Brainiac has crossed the universe, collecting cities from interesting planets – including Supergirl’s home city of Kandor – and now the all-knowing, ever-improving android has his sights fixed on Metropolis. Superman must summon all of his physical and intellectual resources to protect his city, the love of his life and his newly-arrived cousin.