What do you get when you take the fun and raw energy of a character like Spiderman, remove all of the confusing continuity and throw in a few foul words for good measure? Why, you get "The Bounce #1" from Image Comics of course!

It's energetic, dynamic, refreshing and channels a delightful sense of youth. If like me you've been meaning to pick up a Spider-Man book but have been too intimidated by the convoluted past of Peter Parker, then this is the book for you.

Meet Jasper Jenkins, a twenty-something year old pot-head who just so happens to be the costumed vigilante known as "The Bounce" who has the power to... uh, well... bounce... I guess. That is literally as much as writer Joe Casey gives away about the character. Like Casey's other series with Image, Sex, The Bounce seems like it's going to be a slow burn. Jasper's powers aren't at all explained or explored in this introductory issue apart from a brief showdown between The Bounce and some sort of bruiser type villain known simply as The Crush. 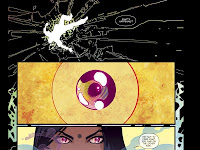 Likewise, all we know about the world of The Bounce is that super-powered individuals are beginning to emerge, however, where their powers come from is not revealed. Make no mistake, this is no spoon-fed origin story, instead Casey throws you into the deep end and lets you make sense of what's going on for yourself - well, as much sense as you can. The Bounce #1 is a very busy issue with a lot going on and not a lot of explanation, making it a comic that rewards the intelligent and observant reader.

David Messina's art brings an instant likability and accessibility to the book. It's straight up top-notch comic book art featuring strong jawed males with pecs about to burst out of their spandex suits. It's precise and detailed whilst encapsulating a fun, comic book sensibility that makes superhero art so iconic.

My only artistic criticism would be that Messina's depictions of motion do leave something to be desired. Somewhat static poses are blurred in an attempt to infer motion but it doesn't always work. There is no real flow to between the action heavy panels and some of the "dynamic" poses Messina draws Japser in are just plain awkward. But in the end, it's all pretty inconsequential as this first issue is not about the action.

Sure, the fight scene between The Bounce and The Crush certainly helps punctuate all of the dialogue and brings in the superhero element, but it's really not the core of the issue. The Bounce's real appeal is in this sense of mystery and intrigue behind how and why this brave new world of super-powered beings is emerging. It's accessible but cryptic, and although I'm not sold on the book just yet I'm certainly looking forward to the second issue.