The Great Gatsby - Review by Stu 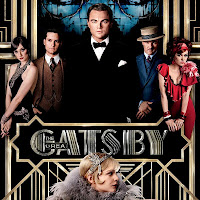 For the most part I try to watch films with an open mind and no expectations. But when I first heard that Baz Luhrmann would be directing The Great Gatsby I instantly knew that I wouldn’t enjoy it. I know that sounds narrow-minded but I’ve never warmed to his style of storytelling – like a comedian that I never found funny. I just don’t care for his flashy sequences and manic camera techniques.

I found The Great Gatsby to be a bloated, self-indulgent and hollow film.

I don’t understand how Baz Luhrmann gets by doing the same old shtick. He’s renowned for his visual flair and unique cinematic vision but he hasn’t done anything new in his past few films. It all just comes across as unrestrained flashiness to me. What’s more, his visual style rarely assists the story or character development. I feel as though he’s prepared to sacrifice the effectiveness of a scene in order to present pure spectacle.


The story of The Great Gatsby is quite compelling – but we have F. Scott Fitzgerald to thank for that. It was last brought to the big screen in 1974 in a film which starred Robert Redford and Mia Farrow. The question must then be asked: was another version required? I say maybe, but not by Baz Luhrmann, since he basically traces around the lines of the previous one, but without half the emotional gravitas. I have no problem with remakes, but what I would prefer is that film makers at least put a new spin on the story instead of merely coughing up a computer-graphic-laden inferior copy. Sure this can now be the ‘The Great Gatsby’ for our generation, but does that mean that every 30 years or so we’ll have to stocktake the library and re-skin the old classics? Of course not, unless Hollywood is trying to convince us that they’ve run out of fresh ideas once again.

On a positive note, the performances in The Great Gatsby are fun and accomplished, if not superb. The highlight for me was Joel Edgerton as Tom Buchanan. He easily matched his more seasoned co-stars Leonardo DiCarprio (as Jay Gatsby) and Toby Maguire (as Nick Carraway). The big letdown was Carey Mulligan, from whom I expected big things, but who unfortunately just phoned in her best wide-eyed-tweety-bird-dream-girl routine as Daisy Buchanan. As is usually the case when directors focus more on visuals than performances (paging Mr Lucas!), I felt that many scenes lacked the emotional punch that was required to make them memorable. Surprisingly, the best scene of the film occurred in Nick Carraway’s cramped house, in which he is hosting a morning tea for Gatsby and Daisy. It’s the only time Luhrmann took his foot of the pedal long enough to let the scene breathe and let the actors have a few moments to show off their craft. Noticeably, the scene contained very little dialogue and more traditional camera angles. I just wish there was more of it throughout the film.

Maybe it’s my bias bubbling to the surface but this film just wasn’t for me. If you like Luhrmann’s work you’ll probably get a real kick out of it. Sadly, I just got what I was expecting.