The horror genre is stale. Over the last few years, horror films have been more interested with cheap thrills and gore than lingering chills and actual horror. Undoubtedly due in part to the profitability of the Saw and Paranormal Activity franchises.

Sinister tells the story of true-life crime writer, Ellison Oswalt (Ethan Hawke), who relocates his family in order to solve some of the mystery surrounding the murder of a family of four. Unfortunately for the Oswalt's, this is no simple multiple homicide - darkness lurks. So absorbed in the case at hand, Ellison quickly loses grasp of the severity of his situation. Instead of stepping back from the unfolding mystery, he relishes in the potential for finally landing another best selling book release putting both himself and his family in real and immediate danger.

While Sinister still uses many common horror movie tropes such as sudden loud noises and creepy children, it's so much more than that. The story of Ellison, and his portrayal by Hawke is the crowning glory of this film, which is probably the best horror film of recent years. The isolation that Ellison feels, the way that he's loathed by the locals and so utterly alone, even in a house full of family members, adds so much to the overall atmosphere of the film. Instead of being alone in a foreign place or deserted in a forest, Ellison is alone and in danger in what should be a safe place. Further to this, the fact that all of his family are the complete epitome of innocence make the stakes even higher. 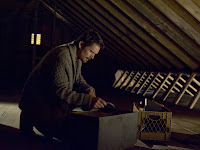 The music in Sinister is as haunting as anything on screen. Composer Christopher Young utilises his experiences with films like Drag Me to Hell and The Exorcism of Emily Rose to full use. Ambient background music and pseudo avant-garde set pieces add to the overall aesthetic of the film and seem to make the physical setting of the film, a single story family home, more grand and menacing than it actually is. Thankfully, Young also refrains from using cheap tricks such as the deep rolling, barely audible rumble that is commonly used in films such as Paranormal Activity just to build tension. This soundtrack works incredibly well in conjunction with what is on the screen.

Ellison's obsession and compulsive search for the truth becomes its own character and is the driving force which pushes the story forward into deeper, darker and more haunting places making Sinister the best horror film in recent years.

Sinister is in theatres now.