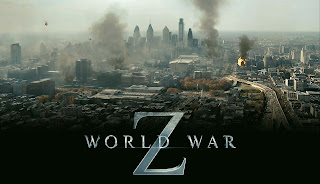 After a much-publicised production debacle, Marc Forster’s World War Z defies the odds, resulting in an entertaining, if flawed, zombie flick. For several years, this graphic novel adaptation lived in limbo. Many suitors have attempted to get it off the ground and failed, leaving it floundering in pre-production hell, until Brad Pitt swooped in and picked it up via his production company Plan B. Once the production began, the internet was abuzz with rumours of script issues, re-shoots and unease on set, which usually forewarns of a sub-standard film. Ultimately, the re-worked final product has its fair share of issues but thankfully manages to scrape a pass.

Based upon the novel by Max Brooks, this film focuses on Brad Pitt’s character Gerry Lane, a former United Nations investigator. Lane is racing the clock in order to unravel the mystery behind an unknown virus that resembles a violent form of rabies, which is rapidly spreading the globe and turning huge populations into swarming masses of zombies. Lane’s investigation takes him around the world, trying to stay one step ahead of the plague as he searches for answers. 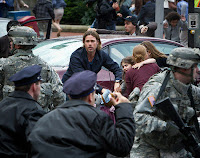 I often grumble about films not adding anything new to their genre. World War Z brings a certain epic scale and an interesting take on zombie behaviour, whilst delivering the standard zombie apocalypse tropes that we love. The action starts in downtown Pittsburgh, with Gerry and his family caught in a massive traffic jam. Within seconds there are thousands of people abandoning their vehicles and running from a wave of zombie attackers. The chaos was captured perfectly by some overhead camera shots, perfect for showcasing the zombies as highly aggressive, swift moving pack animals as opposed to the slow-walking, swaying and groaning cousins we’re used to in this genre.

From a strong opening, the film unfortunately settles into a fairly predictable groove. The film consists of four major set pieces strung together by a fishing line of a story. The problem with this is that there is very little room for character development. Each action sequence can be boiled down to the following: Gerry flies in and has a conversation of some importance then encounters a swarm of zombies and needs to bail only to do it all over again in the next place around the world. I would have preferred to get to know the character better to feel more invested in the outcome. The film phones in the old “family-man” device to win some emotional investment from the audience but I could have done with more character depth. I contrast this with the effectiveness of Shaun of The Dead which did an amazing job developing several characters, giving the film far greater dramatic impact despite its overwhelmingly comedic tone.

The threadbare plotting means that the supporting cast are reduced to mere cameos for the most part. Again I would hazard a guess that there is plenty of footage on a cutting room floor somewhere that was omitted from the final cut. The likes of Peter Capaldi, David Morse and Matthew Fox were left offering blink-and-you’ll-miss-them contributions. That being said, the standout had to be Daniella Kertesz as Israeli soldier Segen. She held her own in the action sequences and made for a nice counterbalance to Brad Pitt.

In time I suspect that a longer version of this film will be released to fill the gaps in the theatrical cut. World War Z provides enough wow moments to warrant a view whilst being fairly disposable entertainment. Best seen in a packed cinema with fellow genre fans for maximum effect.

World War Z hits cinemas on the Thursday the 20th of June, 2013. If you agree or disagree with my review feel free to leave a comment below