Taking its genes from 2011’s Insidious, James Wan’s latest offering The Conjuring favours nerve-stretching tension building to pant-wetting jolts over the torture-porn style pioneered by his first film Saw. While there’s nothing particularly original in the idea or the execution, in this case the usual ingredients are put together well and the overall result is a taut thriller with plenty of atmosphere and the right amount of thrills. 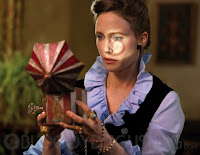 Set in the early 1970s and based around the true life account of husband and wife spook-fighting team Ed and Lorraine Warren (best known for their involvement in the Amityville case of a few years later that gave rise to the famous book and films), The Conjuring follows the couple’s endeavours to help a big family with an even bigger demon problem.

Director James Wan has hit the nail on the head by grasping a basic psychological principle about fear: it only kicks in when you’ve got something to lose; where there’s a threat to something you’re attached to. Investing screen time getting to know the characters is partly why his films work so well. Add to that the casting of people that the audience might actually want to see survive, rather than the prom queen irritants that graced our screens in horror schlock of days gone by, and you’ve got a winning formula.  The male leads (Patrick Wilson and Ron Livingstone) get the job done commendably, but it’s the women in this film that are the true standouts. Vera Farmiga brings a much-needed grace to the role of Lorraine Warren – a character whose portrayal could either make or break the film – and Lili Taylor delivers a fine performance as the mother of the besieged family.

Watching the film, I had to stop myself making a mental count of all the horror tropes in action. Once the number reached around 15, I realised I was only going to enjoy this film if I accommodated the clichés, because The Conjuring has got them all: old-world farmhouse, creepy Victorian toys, clocks that repeatedly stop, possessed dolls and hypersensitive pet dogs. If you’re a solid horror fan who rarely misses a release you’ll definitely have seen it all before, but for the more occasional dabblers in the genre these elements are effectively creepy.

Much like last year’s Woman in Black, The Conjuring achieves a level of suspense through a show of restraint, giving you just enough to keep you engaged but gently accelerating all the way through to a satisfying conclusion. It mightn’t be high-brow cinema, but The Conjuring represents a change-of-direction for the horror genre that I would like to see continued.

The Conjuring is in cinemas from the 18th of July.