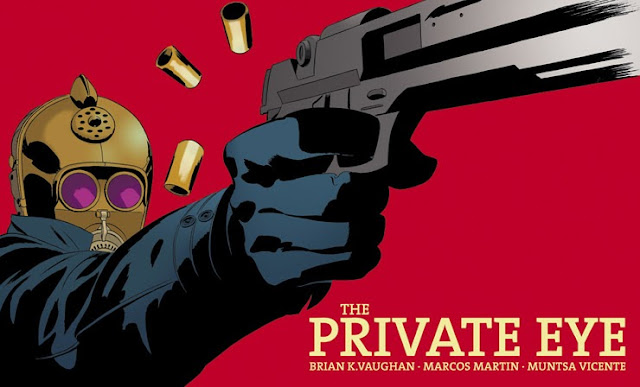 For a medium so steeped with history in physical print publication, digital really is the new frontier for comics. Years after the digital revolution, the "big two" (I refer of course to Marvel and DC) are now catching up with digital releases of their titles. Even with an increasing range of digital funny books many enthusiasts, myself included, will pick physical over digital. The reality is that most of the time when comics are created, little or no thought is put into how they will translate from the printed page to the screen, phone or tablet.

The first big mainstream comics creator to try and change this was Mark Waid who launched the digital comics portal Thrillbent back in May of 2012 to little fanfare. A year later and powerhouse creator Brain K Vaughn and Marcos Martin launch the digital only comic "The Private Eye" only to receive a much bigger reception, and rightfully so.

Not to take anything away from Mark Waid ( for the record I'm loving his Daredevil run) but Vaughn and Martin really nail the key elements of a great digital comic. Instead of getting bogged down in transition effects, like the comics of the previously mentioned Thrillbent, The Private Eye keeps it simple by delivering static landscape pages optimized for digital viewing. Plus It's a pay-what-you-want system meaning you can grab a copy for free if your wallet's a little light.

Ironically enough, The Private Eye is set in a post internet world where everyone's secrets that were once stored on the internet have now gone public. In a world with out the anonymity afforded by the internet normal people are forced to hide their identity in public by wearing brightly colored masks and taking on aliases. This setting makes for a wonderful clash between Marcos Martin's fun and kinetic artistic style, Munsta Vicente's bright cheerful colors and B.K.V's gritty plot. The world looks like a carnival and reads like a dystopian vision of the future.

The story follows an unnamed private investigator, also known as a paparazzo, when he is hired by a young woman to dig up any dirt on her before applying for a high profile job. This seemingly straightforward assignment soon goes to hell and what follows is a tantalizing murder mystery filled with plenty of espionage and intrigue.

B.K.V's wicked sense of humor is very much present, a particular scene involving the P.I's grandfather and an iPhone had me in stitches, as is Marcos Martin's sense of visual style. They make for one hell of creative team and appear to effortlessly deliver a stunning  independent comic that could have easily been picked up by any of the big comic book publishers.

It's nothing short of a triumph of creativity, artistic integrity and ingenuity and represents a leap in the right direction for digital comics. The Private Eye Issues 1-3 are only available digitally via digital comics portal PanelSyndicate.