This is The End Review by Gene Rich

Imagine you and a bunch of mates decided to make a movie. Now imagine you’re best friends are Seth Rogen, James Franco, Jonah Hill and throw in Danny McBride, Jay Baruchel, Michael Cera and Craig Robinson just for good measure. Now imagine you’re given millions of dollars to make the most ridiculous, no holds barred apocalypse movie where the only notable girl in the film is Emma Watson. Sounds like a dream, right? Welcome to This is the End.

Evan Goldberg has created some of the most hilarious material in recent years. Although this is his directorial debut (co-directed by Rogen), his writing credits include Superbad, Pineapple Express, The Watch as well as working on Da Ali G Show. Don’t worry I know I’ve missed a couple but some things should remain unmentioned (Green Hornet you shiny poo). I’m not going to talk a lot about what these guys have done before because they’ve been killing it the last few years and you should know them, but I will mention a couple. Danny McBride has a TV show called East Bound and Down that is absurd, crass and awesome, while Freaks and Geeks is a show relatively unknown here in Australia but is really good and if you want to see Franco and Rogen as youngsters, go check it out. 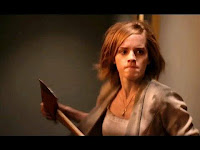 Hearing that a lot of this movie was ad-libbed is not surprising as these guys riff of each other so well in all their films, but this film takes the cake. You can tell they’re having a lot of fun and it’s really enjoyable to watch. There’s not really any point commenting on the construction of the film as it’s mainly a vessel to showcase how unbelievably funny and how jealous we should be of this whole crew. However, the apocalypse does look pretty cool with the Hollywood hills burning and the fire and demons and what not.

The pacing of the film is fast and fun. The jokes come at just the right time and everything just works. There’s really not much else to say, other than, if you like the idea of these guys having creative control over a $32 million movie, go and see it. If dumb plots with awesome dialogue, dick jokes, drugs, possession and Emma Watson swinging an axe interests you in any way, this is the movie for you. If not, go out and see the latest “intelligent” comedy from whomever and try not to get lost in the subtext and innuendo. Personally I know which one I’d rather go see at the flicks.