With the advent of the 24-hour news cycle putting increased pressure on media organisations to focus on quick-turnaround content, the importance of documentary filmmakers has never been greater. With his latest film, We Steal Secrets: The Story of Wikileaks, Alex Gibney presents a master class in investigative storytelling, as he tracks the rise and fall (well, stall at least) of Wikileaks founder Julian Assange.

Just as Michael Moore used the tragic circumstances of the Columbine massacre to turn a spotlight on gun control policy in the United States, Alex Gibney uses the Wikileaks drama to explore government transparency, whistle-blowing and freedom of information. Whilst no-where near as showy as his counterpart Moore, Gibney presents a balanced, well-paced and thoroughly researched argument. The facts are presented accessibly and dispassionately - very refreshing given such a divisive subject matter, where in-depth journalistic treatment is rarely unbiased. I admire documentary-makers who tackle high profile subjects because they have to deal with public perceptions, misconceptions and, often, a passionately opinionated audience at risk of becoming off-side. To those who have followed the Assange saga closely there will be very few surprises, but that being said, even an affair which has been played out so publicly does have a few nooks and crannies worthy of exploration. 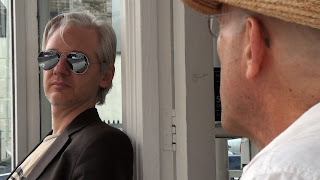 It’s amazing just how much stock footage is available for filmmakers to mine and how they utilise the footage in very diverse ways. For instance, Asif Kapadia’s Senna (2010) is comprised entirely of stock footage, whereas James Marsh’s Man on Wire (2008) blends stock footage and re-enactments to great effect. Gibney uses stock footage, studio interviews and computer-generated images. The interviews are with former Assange co-workers, high ranking government officials and Assange sympathizers which, again, illustrate Gibney’s well-balanced approach to the material.

In addition to profiling Julian Assange, the documentary also shines a gigantic spotlight on the plight of Bradley Manning, the young American intelligence analyst responsible for the lion’s share of Wikileaks’ releases. The film switched beautifully between Assange’s thirst for rock-star style celebrity and Manning’s ever deepening emotional and psychological issues. It was a clever stroke by Gibney to sober such an inflammatory subject with Manning’s poignant human story.

The film also looks at role traditional media outlets have played in the whole Wikileaks affair. These outlets have been both partner in crime with Assange and the means by which Assange was able to command such global notoriety. Without revealing too much, the documentary looked at some very interesting aspects of the media’s handling of the fallout from the leaks.

I highly recommend that everyone get out and watch this film: it’s exceptionally well made and delivers a bit of much-needed clarity on the issues and characters that surround the Wikileaks story. One of the beautiful things about documentaries is that they can contain characters that are so unique you probably wouldn’t believe them unless they were real. From the humanitarian-anarchist Assange to misfit Manning and all the high-end officials in between, this is almost too good to be true. A must see film.
Adrian Lamo Alex Gibney Bradley Manning Documentary Geek of Oz Julian Assange Movies Stu Coote Wikileaks