Right now Jonathan Hickman is dominating the comic book sales charts with his own brand of science-fiction story. His creator owned titles such as The Manhattan Projects and East of West as well as his runs on Avengers and FF have all revelled in high-concept plot devices, epic threats and all encompassing settings. So it's no surprise that the relatively low key sci-fi story, Resident Alien by Peter Hogan and Steve Parkhouse, slipped under the radar of most comic book readers, myself included.

It's a real pity that this miniseries hasn't yet gotten the attention it deserves as it is hands down one of the best comics I have ever had the pleasure of reading. It's right up there with classics such as Watchmen and The Dark Knight Returns, admittedly not in scale or mythos, but very much on par in terms of the quality of writing and visual storytelling.

Collecting Issues #0-3, Resident Alien: Welcome to Earth tells the story of Dr Harry Vanderspeigle a stranded alien posing as an old Dutch Doctor in the small American town of Patience. Admittedly this isn't a sci-fi story as much as a small town murder mystery that just happens to feature a kindhearted extraterrestrial. Stranded on Earth, for a currently undisclosed reason, Harry has no sinister ambitions of world domination but instead just wants to lay low until he can be rescued by his own kind.

This low profile is suddenly compromised when the only Doctor in Patience is murdered forcing Harry to step up and take his place. And just like that the anti-social ET is treating wounds, looking out for his co-workers and trying to solve a murder mystery. These acts of kindness and heroism seem to mean so much more from someone who holds no stake in humanity. It's pretty heartwarming stuff and before I realized it I found myself emotionally invested. 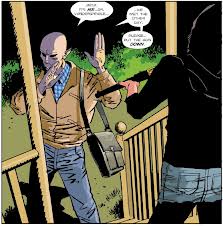 All the small town shenanigans are sparingly punctuated by flashes of sci-fi that elude to Harry's ship crashing and his life before he came to earth. It's just enough to tease the big things to come without detracting from the small town story at hand.

After reading this book there is no doubt in my mind that Peter Hogan is a master storyteller. Over the course of 88 pages he seems to effortlessly deliver authentic dialogue and characterisation. All of the characters feel real and natural to the point where you can't help but be sucked in with Parkhouse's art acting as the perfect compliment.

The art isn't flash or action packed like the double splash pages we are used to seeing from the big two instead focusing on function. It tells you just as much or as little as it needs to and like Hogan's script, it all seems to flow flawlessly.

Just like the fictional town it is set in, Resident Alien is quaint and charming and I can't wait to start reading the next installment.