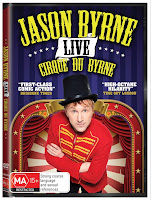 Thanks to our good friends at Roadshow we have 5 copies of Jason Byrne: Cirque Du Byrne on DVD to giveaway.

Available in stores now, Cirque Du Byrne showcases just why Byrne has become one of the highest selling comedians at the legendary Edinburgh Comedy Festival.

After filming live at London's Hammersmith Apollo, Byrne said "There is going to be a pretty AMAZING finale, I don’t want to spoil it for you but it was so frickin’ incredible you would have wished you were there. Shame you weren’t actually, would have been nice to see you. But then I guess that’s what you want to buy the DVD for. Oh, ok go on then.”

All you have to do is fill out the form below and you're in the running to win a copy. Don't forget, you can score yourself an extra entry just by following us on Twitter or liking us on Facebook!

Jason Byrne will be in Australia for a national tour of his new live show Special Eye.

Entries close 11:59pm on Sunday 18th August 2013. Your details will not be used in any way other than for the delivery of your prize. Geek of Oz and Roadshow do not take any responsibility for the loss, damage or delay of/to prizes sent to winners (blame Australia Post for that one). The judges decision is final and no correspondence will be entered upon. One entry per person. Prizes are not redeemable for cash or any other kind of trading currency such as creds, latinum, sen, kan, zeni, double dollars or Ankh Morpork dollars. Geek Of Oz take no responsibility for head explosions caused by utter awesomeness. This competition is only open to Australian residents. Any questions or queries can be submitted through the comment section at the bottom of screen. Good luck!
Cirque Du Byrne Comedy Competitions DVD Give Away Jason Byrne stand up comedy