Madman Roll Out a Swag of Transformers Releases 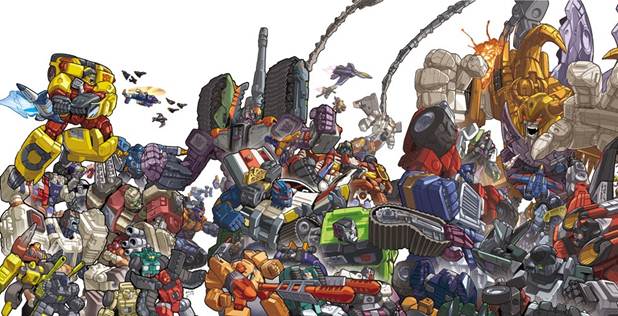 Of any childhood franchise, Transformers certainly holds a special place in my geeky little heart so the press release below from Madman makes for many of the happies.

What makes me even more happy is that these aren't just any releases, they're the perfect accompaniment to Madman's already extensive coverage of Transformers lore. Transformers fans, like myself, are in for a treat and will no doubt relish the bevvy of releases planned up until Michael Bay's next instalment.

Following the revelation that ‘Transformers 4’ will be titled Transformers: Age of Extinction (and of course, that there will be Dinobots), Madman is proud to announce that a new collection of fan-favourite Transformers releases, consisting of the Transformers Animated series and the Transformers Unicron Trilogy, will begin hitting DVD shelves and digital platforms from November, 2013.

The first release on November 20 will be the complete first season of Transformers Animated, the 2007 marquee Cartoon Network series which was the basis for Hasbro’s toyline of the same year leading into the release of the first Transformers live action movie.

Closely following in December, Madman will unleash the first stage of the Unicron Trilogy with the first season collection of Transformers Armada, the 2002 series which featured staples Megatron, Optimus Prime and Starscream alongside fan-favourites such as Hot Shot and introduced the world to the ‘Mini-Cons’.

Consisting of Transformers: Armada, Transformers: Energon and Transformers: Cybertron - and named after the big bad villain featured across all three series - the Unicron Trilogy was a collaborative reboot of the Transformers universe, conceived out of America and animated and created in Japan by the likes of Studio Gonzo (Full Metal Panic, Hellsing), Actas Inc (Shin Megami Tensei Devil Children) and 3D graphics specialists, Studio A-CAT.

Both Transformers Animated and the three seasons of the Transformers Unicron Trilogy have previously aired on Australian television on Cartoon Network and Channel 10.

Madman will continue to release further Transformers Animated and Transformers Unicron Trilogy season collections on DVD and digital platforms into 2014, with a new release assured for each month leading up to May – ahead of Michael Bay’s Transformers: Age of Extinction, which will hit cinemas in late June, 2014.