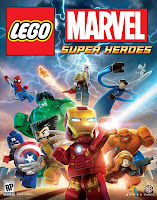 Stan Lee is a name synonymous with Marvel Comics but now the co-creator of Spider-Man, Iron Man, X-Men, The Fantastic Four and many others is fighting alongside his creations in LEGO MARVEL SUPERHEROES. See him spin webs, stretch fantastically and Hulk out alongside X-Men, Avengers and the Fantastic Four.

The LEGO franchise has expanded from it's 1932 beginnings as a wooden toy manufacturer to the impending release of a Hollywood backed blockbuster film and in the midst of it all is the tremendously successful series of video games.

While these video games may be based upon already successful franchises, the LEGO icon and namesake "leg godt", Danish for "play well", serves as the ethos for past and future productions. In short: if it's Lego, it's fun.

Check out what Stan "the man" Lee has to say about his Lego experience. EXCELSIOR!

LEGO® Marvel  Super Heroes features an original story crossing the entire Marvel Universe. Players take control of Iron Man, Spider-Man, the Hulk, Captain America, Wolverine and many more Marvel characters as they unite to stop Loki and a host of other Marvel villains from assembling a super-weapon capable of destroying the world. Players will chase down Cosmic Bricks as they travel across LEGO Manhattan and visit key locations from the Marvel Universe, such as Stark Tower, Asteroid M, a Hydra base and the X-Mansion.
Set for release this spring, the game will be available for Xbox 360®, PlayStation®3, Wii U , Nintendo DS , Nintendo 3DS , PlayStation® Vita, PC, as well as next-gen consoles Xbox One® and PlayStation® 4.