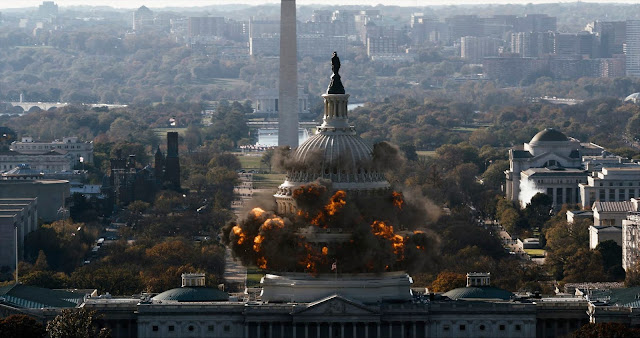 Deep Impact tussled with Armageddon, Dante’s Peak schooled Volcano and now its White House Down’s opportunity to go twelve rounds with its own evil doppelganger Olympus Has Fallen. Finally we’ll have the definitive White-House-destroying, Die Hard-imitating, American-Flag-waving film I’ve been searching for these past few years. I don’t shy away from the fact that I hated Olympus has Fallen, in fact I’m tempted to just use this review to kick the film a few more times, but I won’t because that would only drag me down into the gutter where Olympus Has Fallen lives with the other garbage, filth, vile trash and lies… but I digress. White House Down is an entertaining and surprisingly funny action film with solid performances. 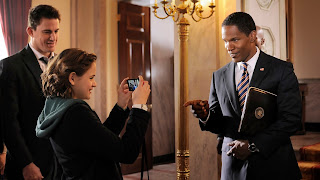 The world is on the brink of peace, with President Sawyer (Jamie Foxx) preparing to announce that all U.S troops will be withdrawn from the Middle East. On the morning of the big day, Capitol Policeman John Cale (Channing Tatum) is taking his daughter Emily (Joey King) for a tour of the White House. John, who just happens to be a former marine, is also hoping to get a job in the President’s Secret Service detail. Peace takes a back seat though when the White House is rocked by an explosion followed by a hostile takeover. Separated from his daughter, John is forced to team up with the President to kick some ass and take some names. Yes it sounds ludicrous, but the performances really make it work. 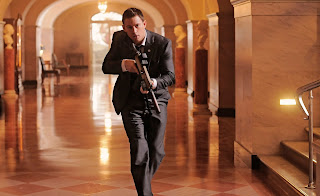 Channing Tatum is quickly becoming an actor I’ll watch in any role. His man-child-gripping-with-responsibility shtick really works for me, although it would be interesting to see him try some new things. His recent films with Steven Soderbergh, Side Effects and Magic Mike have really shown off his dramatic chops. Combined with the fact that women (and by that I mean my girlfriend) can’t get enough of him shirtless makes the dude a lethal cinematic weapon. Jamie Foxx doesn’t quite bring his Django Unchained intensity this time around but he’s able to bring a little vulnerability to an otherwise one-dimensional character. James Woods and Richard Jenkins are fantastic as the crusty old, seen-it-all-before Washington veterans; James Woods in particular brings his manic charm. Jason Clarke and Maggie Gyllenhaal round out the cast and both impress as per usual. 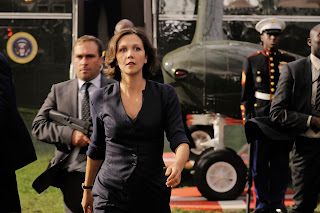 Roland Emmerich isn’t known for his subtlety or restraint as a director, given his proclivity for massive blockbusters. The man has brought some truly massive films to the big screen, including the likes of Independence Day, 2012, The Day After Tomorrow and of course Godzilla. Whilst the calibre of his work varies, it’s at least ambitious. The action is mostly close quarter, hand-to-hand combat and simple gun fights, which is refreshing after so many action films of late preferring long winded Kung Fu scenes and unnecessary levels of destruction (yes, Man of Steel, I’m talking to you). White House Down is similar to Die Hard in that the heroes spend most of their time hiding in vents and picking off bad guys one by one.

White House Down is the junk food you know you shouldn’t eat. It’s cheap, cheesy and you know it’s bad for you but sometimes it’s nice to just gorge yourself. White House Down hits theatres Thursday the 5th of September. If you see the film and agree or disagree with my thoughts feel free to drop a comment below.