Available now on Blu Ray, DVD and digital, Iron Man 3 is the latest in Marvel Studios' multi squillion dollar franchise. Okay, a slight exaggeration there however Iron Man 3 IS the 5th highest grossing feature film of all time and we've got 3 copies on Blu Ray to give away thanks to our pals at Disney.

After finally settling down with girlfriend Pepper Potts (academy award winner Gwyneth Paltrow) Tony’s life is thrown into turmoil when an unknown enemy shatters his world. Embarking on a journey to find those responsible, the cunning entrepreneur will be tested at every turn.

Forced to rely on his wits to conquer evil and exact revenge, Tony must reexamine his life and answer the question that has secretly plagued him all along, does the man make the suit or does the suit make the man?

All you have to do is fill out the form below and you're in the running to win a copy of Iron Man 3 on Blu Ray. Don't forget, you can score yourself an extra entry just by following us on Twitter or liking us on Facebook!

Entries close 11:59pm on Sunday 15th September 2013. Your details will not be used in any way other than for the delivery of your prize. Geek of Oz and Disney do not take any responsibility for the loss, damage or delay of/to prizes sent to winners (blame Australia Post for that one). The judges decision is final and no correspondence will be entered upon. One entry per person, subsequent entries will be void. Incorrect answers will be void. Prizes are not redeemable for cash or any other kind of trading currency such as creds, latinum, sen, kan, zeni, double dollars or Ankh Morpork dollars. Geek Of Oz take no responsibility for head explosions caused by utter awesomeness. This competition is only open to Australian residents. Any questions or queries can be submitted through the comment section at the bottom of screen. Good luck! 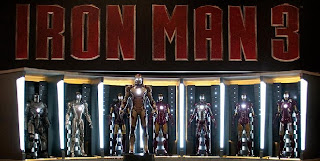