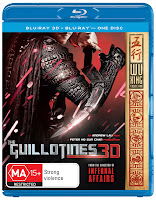 Available now on Blu Ray and DVD, The Guillotines 3D is the latest action blockbuster from superstar Andy Lau and thanks to our friends at Icon we've got 3x copies of The Guillotines on 3D Blu Ray to give away!

Arguably history's first SWAT team, this covert assassination squad of the emperor was composed of young street thugs who had been killing for food and survival since they were kids. Trained to use the Flying Guillotines, the deadliest weapon ever invented, they competed with one another to be the best killer. Merciless and arrogant, they live life in the fast lane, until one day it was revealed they've been killing the wrong people for the wrong side. As they were ambushed by another team of killers, and the hunters became the hunted, they were forced to kill for their survival again or faced imminent annihilation - Icon

All you have to do is fill out the form below and you're in the running! Don't forget, you can get yourself a bonus entry just by following us on Twitter or liking us on Facebook!

THIS COMPETITION IS CLOSED

Entries close 11:59pm on Sunday 27th October 2013. Your details will not be used in any way other than for the delivery of your prize. Geek of Oz and Icon do not take any responsibility for the loss, damage or delay of/to prizes sent to winners (blame Australia Post for that one). The judges decision is final and no correspondence will be entered upon. One entry per person, subsequent entries will be void. Incorrect answers will be void. Prizes are not redeemable for cash or any other kind of trading currency such as creds, latinum, sen, kan, zeni, double dollars or Ankh Morpork dollars. Geek Of Oz take no responsibility for head explosions caused by utter awesomeness. This competition is only open to Australian residents. Any questions or queries can be submitted through the comment section at the bottom of screen. Good luck!
Andy Lau Blu Ray competition Competitions DVD The Guillotines Wu Xia