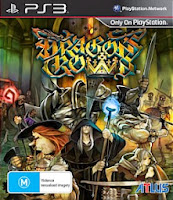 Positively dripping with old-school retro appeal, Dragon’s Crown (ドラゴンズクラウン) from developer Vanillaware and publisher Atlus is a throwback to the glory days of 8 and 16 bit side scrolling beat em’ups like Double Dragon, Streets of Rage and, of course, Golden Axe.

Bucking the market wide trend of 3D graphics, Vanillaware have instead opted for 2D, hand painted imagery with naturalised movement implemented through a process which looks like sophisticated Flash animation. In short, it looks like moving pictures. This somewhat lo-fi approach to the game makes for an original experience which is both completely fresh and yet delightfully archaic. For some reason, it’s exactly how I remember Golden Axe. I don’t remember it being as pixelated as it actually was. In my rose coloured memory, Golden Axe and Streets of Rage (including subsequent sequels) were every bit as fluid and vibrant as Dragon’s Crown. This in itself makes this beat em’ up all the more enjoyable.

Not content with settling for a stock standard hack and slash, Dragon’s Crown is the modern day embodiment of the side scrolling genre. Taking elements from the RPG realm, the “loot” system plays a big part in this game and can be earned through the main story line or various side quests. Dungeons not only unfurl the story line  but also award you with valuable loot in the form of gear, but also gold which can be used for various unlocks and rewards. The hardest part of the loot system is deciding what to spend your hard earned on. The story itself is rather standard fantasy fare being neither outstanding nor poor however, at times, feels as though it gets a little side tracked from the main story.

The character design is varied and eye popping. The elephant in the room is the portrayal of female characters, the Witch character in particular whose “assets” each weigh more than a small Dwarf. You can check out the character designs that we posted earlier if you need a reminder. While this is ridiculous, it should also be noted that male characters in the game are equally as anatomically incorrect. The Warrior class, for instance, is so broad chested that his knees would surely buckle under his own weight. These arguments aside, these sort of character designs are standard Japanese pop culture fare. While the main 6 characters are well designed and executed, it’s the monster design that truly impresses. Iconic fantasy creatures such as goblins, orcs and lizardmen look fantastic but lets face it, this game isn’t called Dragon’s Crown for nothing. As expected, the Dragon’s look awesome and add to the overall scale of the game.

When speaking scale, Dragon’s Crown really steps things up to a new level when encountering bosses. At one moment you’ll feel like an invincible albeit top-heavy warrior, cleaving mushroom creatures in twain, and the next you will feel like a diminutive bug being squashed under foot. The camera angles constantly alter according to the needs of the scene - big boss, wide angle etc. The constantly evolving threat in Dragon’s Crown makes for a perpetually engaging game. Further to this, your decision in class will affect the difficulty that you experience with the magic arts being recommended for experienced players. Each class would take about 15-20 hours to play through and you can switch between profiles at the Inn so if you find yourself getting tired of the Dwarf, switch to the Warrior for a change! Another way to look at that conundrum is that the replay factor for this game is very high.

There’s a lot to love about this game from its Japanese take on the sword and sorcery genre and hand crafted visuals to its ongoing replayability and retro appeal. Not only is this game beautiful and heaps of fun, it’s also easily approachable by gamers of any skill level thanks to its rather accommodating difficulty and leveling system. Dragon’s Crown welcomes you to the side scrolling renaissance.