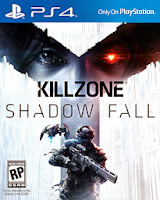 The 2 storey Playstation arena was well lit with the company's trademark azure hue while a bumper crowd lined up to get their first look and feel of the upcoming next gen console, PS4. Sporting rows and rows of playable PS Vita games and a gorgeous Lexus LXA promoting Gran Turismo, the Sony booth was a buzz. Of all the games on display the one I was most interested in playing was Killzone: Shadow Fall and luckily for me, I got my shot.

The very first impression from Killzone: Shadow Fall wasn't actually an impression of the game at all but of the controller. The PS4 controller feels to be around the same weight as the current Dualshock controller but feels much more sturdy and almost completely solid. The handgrips are sturdy and fit perfectly in the hand. The minimalist design of the controller almost makes it appear more iconic, instead of relying on typology to let you know that it's a Sony, the now classic square, circle, triangle and X tell you that it just is. This is the controller that I'll be using for the next 7 or so years. I can live with that.

On to Killzone and a multiplayer mission with approximately 15 other players. I choose the classic assault load out and launch into the game. The map is dark, only illuminated by the infrared glow of my team mates silhouettes and a sporadic spotlight. After around 10 seconds of fumbling with the controls, I get my first kill. While it may have been a reactionary shot when turning a corner I'll take it, especially when I take a sniper round to the temple a moment later.

The map design is brilliant, forcing players to choose whether they run across open land or risk being sprayed like fish in a barrel by taking to the tunnels. Either way, all it takes is a couple of shots and you're done for. I thought I'd found a good camping position after the next respawn where I was able to pick off people in the tunnels from above, add a well placed grenade and I'd quickly racked up 8 scalps. But camping in this map is not an option. Even if you think you've got a good hidey hole, there always seemed to be a line out sight that would see you unstuck. I'd learned my lesson, keep moving.

Seeing the infrared outlines of your team mates as they keel over was a good indication that something wicked this way comes. The real decision was whether to await the enemy or hunt the hunters. With only a 10 minute demo to play, I forge on, guns literally blazing. The muzzle flare from my assault rifle was so intense that it would block my view, forcing short bursts of fire instead of the blanket razing of hell that I'm so prone to. The muzzle flare "issue" left me wondering whether you'd be able to upgrade your armament with options such as a suppressor while playing through the campaign. Fingers crossed.

I was a big fan of Killzone 3 and I've heard great things about Killzone: Mercenary so it's good to see that Killzone: Shadow Fall is as highly polished as it had ought to be, being a PS4 launch title. Unfortunately we didn't get to see some of the in-game tech, such as OWLS, at work.

Killzone: Shadow Fall is available from the 29th of November, only on Playstation 4.