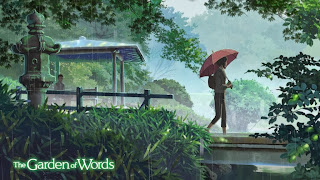 One day when on his way to school budding shoe designer, 15 year old Takao Akizuki, makes an executive decision. He decides to skip school each and every rainy day to sketch designs and soak in the scenery of one of Tokyo's most beautiful parks, Shinjuku Gyoen. During his first visits he encounters Yukari Yukino, a beautiful business woman who sits, wordless, drinking beer and eating chocolate. The Garden of Words is their story.

Unlike his previous films such as Children Who Chase Lost Voices and Voices of a Distant Star, director Makoto Shinkai has forgone any semblance of whimsy of fantastical backdrop and has instead decided to play this story straight. Although set in the real world, the organic beauty of Shinjuku Gyoen is almost otherworldly. That is to say, this garden is impossibly beautiful even in real life. Shinkai's attention to detail is without equal in the anime industry, a statement that isn't made lightly. Without focusing on irrelevant minutiae, Shinkai manages to let certain images linger for just long enough to allow their beauty sink in. A drop of rain in a puddle. The fleeting touch of a leaf on the ponds surface. These moments ensure that the third protagonist in this film, the park itself, plays its part as well.

The visual prowess of this film continues with cinematography that should be considered a masterclass to the impact that depth and movement can have on the viewer. Anime often utilises quick cuts or stationary shots, and generally there is nothing wrong with that. The Garden of Words, however, utilises depth to full effect which not only draws the viewer in but also makes the film appear to be more real and almost alive. Unfocused backgrounds and foregrounds ensure that your focus is always on what Shinaki wants you to be looking at while varied camera angles are used to great effect. In short, everything about this film is luscious, beautiful and brimming with emotion.

The fact that this film, at 46 minutes long, can have you completely emotionally invested in the characters and their stories is a testament to the film making abilities of each and every person involved in the process. The pacing feels natural and never rushed allowing the characters to develop naturally and at no point does the point feel forced. The story itself isn't exactly grandiose and this in itself shows a level of restraint that benefits the film. By settling for a smaller story, albeit an emotional rollercoaster, the film itself feels like it is exactly the right length for what we're given.

I truly wasn't expecting for this film to be my favourite out of the 5 on offer during REEL ANIME but the way that I became entirely emotionally invested in such a small amount of time is incredible. The Garden of Words is nothing short of a masterpiece.

Tickets for this years REEL ANIME festival are on sale now or if you need further convincing, check out the rest of our REEL ANIME 2013 reviews.