One of my favourite things about reading comics is constantly being surprised by all the truly unique and talented creators that work in the medium. Brandon Montclare and Amy Reeder are two such creators. Their new Image Comics series, Rocket Girl, didn't blow my mind nor did it render me unconscious from awesome. It did, however, leave me with a big fat smile on my face.

Rocket Girl #1 is charming, pretty, a tiny bit cliche but mainly a whole bunch of fun as Montclare and Reeder begin to extract as much as they can from the premise of a 15 year old girl fighting crime with a jet pack.

Rocket Girl #1 follows the exploits of Dayoung Johansson, a teen cop from a future wherein everything that 80's movies promised us the world of tomorrow would be, exists. Flying cars buzz around giant skyscrapers whilst, on the ground, helper robots scuttle alongside their human masters . The only problem is that this world of tomorrow is actually 2013, and the last time I checked, we don't have flying cars... either that or I really don't get out much. With this in mind, Dayoung goes back in time to the forgotten world of 1986 New York to figure out what disrupted the time stream. 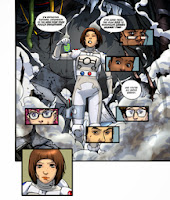 The  premise makes for some gorgeous visuals from artist Amy Reeder. Reeder's art is as kinetic as it is playful and each panel dances into the next. The characters all look alive, with each gesture and eye glance reminding the reader why a picture is worth a thousand words. The art really carries the story and is evident of a strong collaboration between artist and writer. I was particularly impressed by the detailed action sequences, specifically a double page spread involving acrobatics and handcuffs. The innovative and creative panel layout also deserves special mention.

To bring it back to the writing, Montclare delivers a solid script with a good balance between plot and humor. He writes Dayoung as a lovable bad-ass with enough flaws to make her instantly relatable. She also has more than enough personality, which is great because the supporting characters have yet to come into their own.

As for the 'disruption to the time-stream' plot hook, it's not particularly original but Montclare makes it work. It almost seems like the disruption is just an excuse for Dayoung to go back to the 80's. This is more than fine by me because it means we get the stunning visuals of a girl with a jet pack flying through an iconic 1986 New York. Make no mistake this is very much Reeder's show.

Rocket Girl #1 is a case of come for the art and stay for the story, but rest assured you will want to stay.