Our pals up in Brisbane are celebrating at Supanova this weekend which means, as always, acquisition announcements.

Hanabee have 3 MASSIVE announcements for us including ACCEL WORLD,  ORESHURA and BTOOOM! The only negative to these announcements is that we have to wait until February!

As an added bonus, Hanabee have also hinted at the fact that they will have even more announcements for us at Supanova Adelaide next week. What do you think they may have up their sleeves?

Follow on after the jump for the new title announcements.

Are you prepared to accelerate beyond your world?
In the near future our lives will be organised and played out through devices known as Neurolinkers. Utilising it enables access to a virtual reality where there are no limits on an individual, for Harayuki Arita, this is freedom.
Neither rich, popular nor particularly attractive, Harayuki spends his time building his ideal self here. He dominates this space until it is cruelly taken away from him from his high school bullies. However salvation is at hand when Kuroyukihime, the school’s most popular girl, offers him another chance to escape and become the person he’s always wanted to be. Except this offer has a catch and it deals with his life.
Delving into the virtual reality known as Accel World, Haru will need to learn quickly how to fight if he wishes to uncover the secrets of this world and become Kuroyukihime’s knight.
Accel World Part 1 will be available on DVD on the 8th of February 2014.

Be careful what you wish for.

Ryouta Sakamoto has suddenly been transferred in to a deadly high stakes game. A game he is all too familiar with. Left on a mysterious island with a set of provisions, a bag of bombs and a strange crystal embedded into his left hand – this is the world of Btooom realized.

Beautifully replicated, this game of Btooom is an all out dog eat dog world, where to escape you will need to kill seven others before they kill you. But there’s a difference between a game and reality. When a death is a death and there are no second lives, Ryouta is about to learn the value of a life.

BTOOOM! will be available on DVD and Blu Ray on the 8th of February 2014. 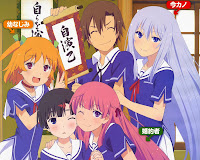 Eita Kido has found himself exactly where he didn’t want to end up; the middle of a love triangle. But are his love interests really interested in him, or is he just a cover?

Just when the love hating student thought things were complicated the triangle threatens to become a polygon. There’s Masuzu, the school beauty who’s using him, Chiwa, the jealous childhood friend, and now two more girls after his affections?

Looks like Eita’s philosophy on love isn’t working out.

Oreshura will be available on DVD on the 8th of February 2014.